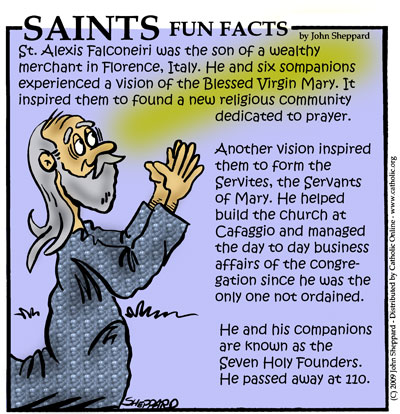 Founder and mystic, one of the first Servants of Mary or Servites. The son of a wealthy merchant in Florence, Italy, Alexis and six companions joined the Confraternity of the Blessed Virgin in Florence in 1225. Gathered together on the Feast of the Assumption in 1233, the group experienced a vision of the Blessed Virgin Mary which inspired them to found a new religious community dedicated to prayer. They founded such a group at La Camarzia, near Florence, moving eventually to Monte Senario, on ... continue reading