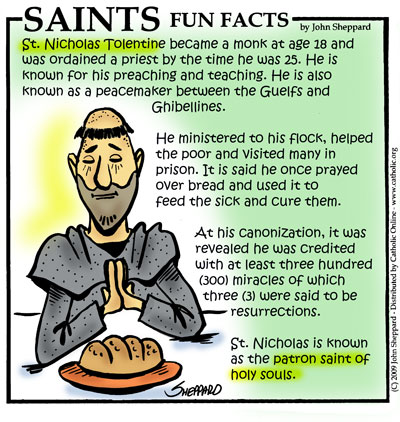 Born in 1245 in Sant'Angelo, St. Nicholas of Tolentino took his name from St. Nicholas of Myra, at whose shrine his parents prayed to have a child. Nicholas became a monk at 18, and seven years later, he was ordained a priest. He gained a reputation as a preacher and a confessor. C. 1274, he was sent to Tolentino, near his birthplace. The town suffered from civil strife between the Guelphs, who supported the pope, and Ghibellines, who supported the Holy Roman Emperor, in their struggle for ... continue reading