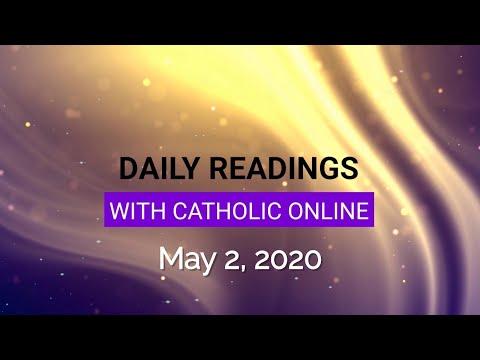 31 The churches throughout Judaea, Galilee and Samaria were now left in peace, building themselves up and living in the fear of the Lord; encouraged by the Holy Spirit, they continued to grow.

32 It happened that Peter visited one place after another and eventually came to God's holy people living down in Lydda.

33 There he found a man called Aeneas, a paralytic who had been bedridden for eight years.

34 Peter said to him, 'Aeneas, Jesus Christ cures you: get up and make your bed.' Aeneas got up immediately;

35 everybody who lived in Lydda and Sharon saw him, and they were converted to the Lord.

36 At Jaffa there was a disciple called Tabitha, or in Greek, Dorcas, who never tired of doing good or giving to those in need.

37 But it happened that at this time she became ill and died, and they washed her and laid her out in an upper room.

38 Lydda is not far from Jaffa, so when the disciples heard that Peter was there, they sent two men to urge him, 'Come to us without delay.'

39 Peter went back with them immediately, and on his arrival they took him to the upper room, where all the widows stood round him in tears, showing him tunics and other clothes Dorcas had made when she was with them.

40 Peter sent everyone out of the room and knelt down and prayed. Then he turned to the dead woman and said, 'Tabitha, stand up.' She opened her eyes, looked at Peter and sat up.

41 Peter helped her to her feet, then he called in the members of the congregation and widows and showed them she was alive.

42 The whole of Jaffa heard about it and many believed in the Lord.

12 What return can I make to Yahweh for his generosity to me?

13 I shall take up the cup of salvation and call on the name of Yahweh.

14 I shall fulfil my vows to Yahweh, witnessed by all his people.

15 Costly in Yahweh's sight is the death of his faithful.

17 I shall offer you a sacrifice of thanksgiving and call on the name of Yahweh.

60 After hearing it, many of his followers said, 'This is intolerable language. How could anyone accept it?'

61 Jesus was aware that his followers were complaining about it and said, 'Does this disturb you?

62 What if you should see the Son of man ascend to where he was before?

63 'It is the spirit that gives life, the flesh has nothing to offer. The words I have spoken to you are spirit and they are life.

64 'But there are some of you who do not believe.' For Jesus knew from the outset who did not believe and who was to betray him.

65 He went on, 'This is why I told you that no one could come to me except by the gift of the Father.'

66 After this, many of his disciples went away and accompanied him no more.

67 Then Jesus said to the Twelve, 'What about you, do you want to go away too?'

68 Simon Peter answered, 'Lord, to whom shall we go? You have the message of eternal life,

69 and we believe; we have come to know that you are the Holy One of God.'