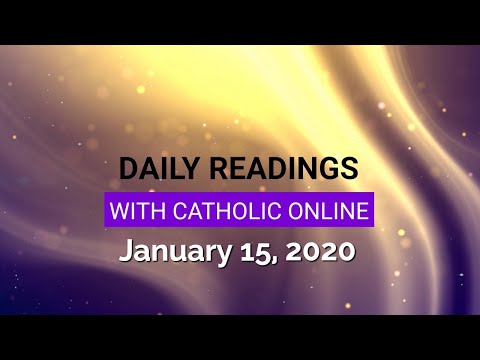 1 Now, the boy Samuel was serving Yahweh in the presence of Eli; in those days it was rare for Yahweh to speak; visions were uncommon.

2 One day, it happened that Eli was lying down in his room. His eyes were beginning to grow dim; he could no longer see.

3 The lamp of God had not yet gone out, and Samuel was lying in Yahweh's sanctuary, where the ark of God was,

7 As yet, Samuel had no knowledge of Yahweh and the word of Yahweh had not yet been revealed to him.

8 Again Yahweh called, the third time. He got up and went to Eli and said, 'Here I am, as you called me.' Eli then understood that Yahweh was calling the child,

9 and he said to Samuel, 'Go and lie down, and if someone calls say, "Speak, Yahweh; for your servant is listening." ' So Samuel went and lay down in his place.

10 Yahweh then came and stood by, calling as he had done before, 'Samuel! Samuel!' Samuel answered, 'Speak, Yahweh; for your servant is listening.'

19 Samuel grew up. Yahweh was with him and did not let a single word fall to the ground of all that he had told him.

20 All Israel knew, from Dan to Beersheba, that Samuel was attested as a prophet of Yahweh.

3 He put a fresh song in my mouth, praise of our God. Many will be awestruck at the sight, and will put their trust in Yahweh.

5 How much you have done, Yahweh, my God -- your wonders, your plans for us -- you have no equal. I will proclaim and speak of them; they are beyond number.

8 my delight is to do your will; your law, my God, is deep in my heart.

9 I proclaimed the saving justice of Yahweh in the great assembly. See, I will not hold my tongue, as you well know.

10 I have not kept your saving justice locked in the depths of my heart, but have spoken of your constancy and saving help. I have made no secret of your faithful and steadfast love, in the great assembly.

29 The next day, he saw Jesus coming towards him and said, 'Look, there is the lamb of God that takes away the sin of the world.

30 It was of him that I said, "Behind me comes one who has passed ahead of me because he existed before me."

31 I did not know him myself, and yet my purpose in coming to baptise with water was so that he might be revealed to Israel.'

32 And John declared, 'I saw the Spirit come down on him like a dove from heaven and rest on him.

33 I did not know him myself, but he who sent me to baptise with water had said to me, "The man on whom you see the Spirit come down and rest is the one who is to baptise with the Holy Spirit."

34 I have seen and I testify that he is the Chosen One of God.'

29 And at once on leaving the synagogue, he went with James and John straight to the house of Simon and Andrew.

30 Now Simon's mother-in-law was in bed and feverish, and at once they told him about her.

31 He went in to her, took her by the hand and helped her up. And the fever left her and she began to serve them.

32 That evening, after sunset, they brought to him all who were sick and those who were possessed by devils.

33 The whole town came crowding round the door,

34 and he cured many who were sick with diseases of one kind or another; he also drove out many devils, but he would not allow them to speak, because they knew who he was.

35 In the morning, long before dawn, he got up and left the house and went off to a lonely place and prayed there.

36 Simon and his companions set out in search of him,

37 and when they found him they said, 'Everybody is looking for you.'

38 He answered, 'Let us go elsewhere, to the neighbouring country towns, so that I can proclaim the message there too, because that is why I came.'

39 And he went all through Galilee, preaching in their synagogues and driving out devils.