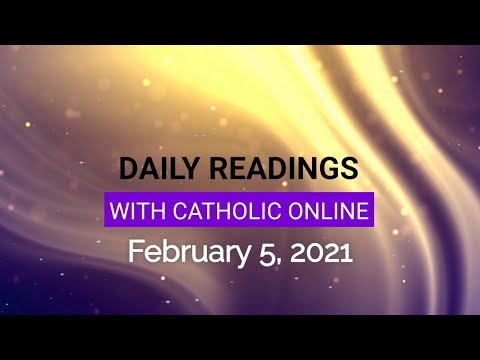 2 and remember always to welcome strangers, for by doing this, some people have entertained angels without knowing it.

4 Marriage must be honoured by all, and marriages must be kept undefiled, because the sexually immoral and adulterers will come under God's judgement.

5 Put avarice out of your lives and be content with whatever you have; God himself has said: I shall not fail you or desert you,

6 and so we can say with confidence: With the Lord on my side, I fear nothing: what can human beings do to me?

7 Remember your leaders, who preached the word of God to you, and as you reflect on the outcome of their lives, take their faith as your model.

8 Jesus Christ is the same today as he was yesterday and as he will be for ever.

5 For he hides me away under his roof on the day of evil, he folds me in the recesses of his tent, sets me high on a rock.

9 do not turn away from me. Do not thrust aside your servant in anger, without you I am helpless. Never leave me, never forsake me, God, my Saviour.

14 King Herod had heard about him, since by now his name was well known. Some were saying, 'John the Baptist has risen from the dead, and that is why miraculous powers are at work in him.'

15 Others said, 'He is Elijah,' others again, 'He is a prophet, like the prophets we used to have.'

16 But when Herod heard this he said, 'It is John whose head I cut off; he has risen from the dead.'

17 Now it was this same Herod who had sent to have John arrested, and had had him chained up in prison because of Herodias, his brother Philip's wife whom he had married.

18 For John had told Herod, 'It is against the law for you to have your brother's wife.'

19 As for Herodias, she was furious with him and wanted to kill him, but she was not able to do so,

20 because Herod was in awe of John, knowing him to be a good and upright man, and gave him his protection. When he had heard him speak he was greatly perplexed, and yet he liked to listen to him.

21 An opportunity came on Herod's birthday when he gave a banquet for the nobles of his court, for his army officers and for the leading figures in Galilee.

22 When the daughter of this same Herodias came in and danced, she delighted Herod and his guests; so the king said to the girl, 'Ask me anything you like and I will give it you.'

23 And he swore her an oath, 'I will give you anything you ask, even half my kingdom.'

24 She went out and said to her mother, 'What shall I ask for?' She replied, 'The head of John the Baptist.'

25 The girl at once rushed back to the king and made her request, 'I want you to give me John the Baptist's head, immediately, on a dish.'

26 The king was deeply distressed but, thinking of the oaths he had sworn and of his guests, he was reluctant to break his word to her.

27 At once the king sent one of the bodyguard with orders to bring John's head.

28 The man went off and beheaded him in the prison; then he brought the head on a dish and gave it to the girl, and the girl gave it to her mother.

29 When John's disciples heard about this, they came and took his body and laid it in a tomb.