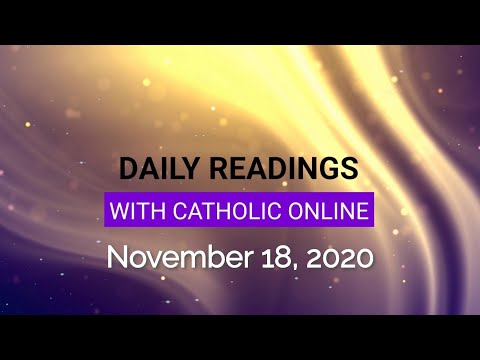 1 Then, in my vision, I saw a door open in heaven and heard the same voice speaking to me, the voice like a trumpet, saying, 'Come up here: I will show you what is to take place in the future.'

2 With that, I fell into ecstasy and I saw a throne standing in heaven, and the One who was sitting on the throne,

3 and the One sitting there looked like a diamond and a ruby. There was a rainbow encircling the throne, and this looked like an emerald.

4 Round the throne in a circle were twenty-four thrones, and on them twenty-four elders sitting, dressed in white robes with golden crowns on their heads.

5 Flashes of lightning were coming from the throne, and the sound of peals of thunder, and in front of the throne there were seven flaming lamps burning, the seven Spirits of God.

6 In front of the throne was a sea as transparent as crystal. In the middle of the throne and around it, were four living creatures all studded with eyes, in front and behind.

8 Each of the four living creatures had six wings and was studded with eyes all the way round as well as inside; and day and night they never stopped singing: Holy, Holy, Holy is the Lord God, the Almighty; who was, and is and is to come.'

9 Every time the living creatures glorified and honoured and gave thanks to the One sitting on the throne, who lives for ever and ever,

10 the twenty-four elders prostrated themselves before him to worship the One who lives for ever and ever, and threw down their crowns in front of the throne, saying:

11 You are worthy, our Lord and God, to receive glory and honour and power, for you made the whole universe; by your will, when it did not exist, it was created.

1 Alleluia! Praise God in his holy place, praise him in the heavenly vault of his power,

11 While the people were listening to this he went on to tell a parable, because he was near Jerusalem and they thought that the kingdom of God was going to show itself then and there.

12 Accordingly he said, 'A man of noble birth went to a distant country to be appointed king and then return.

13 He summoned ten of his servants and gave them ten pounds, telling them, "Trade with these, until I get back."

14 But his compatriots detested him and sent a delegation to follow him with this message, "We do not want this man to be our king."

15 'Now it happened that on his return, having received his appointment as king, he sent for those servants to whom he had given the money, to find out what profit each had made by trading.

17 He replied, "Well done, my good servant! Since you have proved yourself trustworthy in a very small thing, you shall have the government of ten cities."

19 To this one also he said, "And you shall be in charge of five cities."

20 Next came the other, "Sir," he said, "here is your pound. I put it away safely wrapped up in a cloth

22 He said to him, "You wicked servant! Out of your own mouth I condemn you. So you knew that I was an exacting man, gathering in what I have not laid out and reaping what I have not sown?

23 Then why did you not put my money in the bank? On my return I could have drawn it out with interest."

24 And he said to those standing by, "Take the pound from him and give it to the man who has ten pounds."

26 "I tell you, to everyone who has will be given more; but anyone who has not will be deprived even of what he has.

27 "As for my enemies who did not want me for their king, bring them here and execute them in my presence." '

28 When he had said this he went on ahead, going up to Jerusalem.