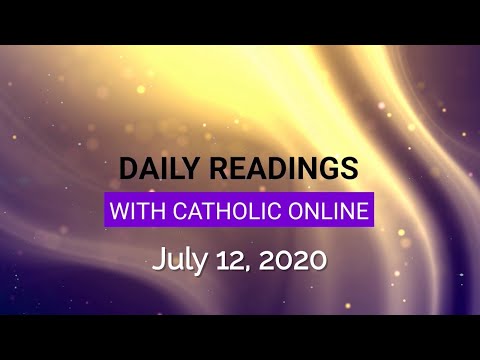 10 For, as the rain and the snow come down from the sky and do not return before having watered the earth, fertilising it and making it germinate to provide seed for the sower and food to eat,

11 so it is with the word that goes from my mouth: it will not return to me unfulfilled or before having carried out my good pleasure and having achieved what it was sent to do.

10 you water its furrows abundantly, level its ridges, soften it with showers and bless its shoots.

11 You crown the year with your generosity, richness seeps from your tracks,

12 the pastures of the desert grow moist, the hillsides are wrapped in joy,

13 the meadows are covered with flocks, the valleys clothed with wheat; they shout and sing for joy.

1 That same day, Jesus left the house and sat by the lakeside,

2 but such large crowds gathered round him that he got into a boat and sat there. The people all stood on the shore,

3 and he told them many things in parables. He said, 'Listen, a sower went out to sow.

4 As he sowed, some seeds fell on the edge of the path, and the birds came and ate them up.

5 Others fell on patches of rock where they found little soil and sprang up at once, because there was no depth of earth;

6 but as soon as the sun came up they were scorched and, not having any roots, they withered away.

7 Others fell among thorns, and the thorns grew up and choked them.

8 Others fell on rich soil and produced their crop, some a hundredfold, some sixty, some thirty.

9 Anyone who has ears should listen!'

10 Then the disciples went up to him and asked, 'Why do you talk to them in parables?'

11 In answer, he said, 'Because to you is granted to understand the mysteries of the kingdom of Heaven, but to them it is not granted.

12 Anyone who has will be given more and will have more than enough; but anyone who has not will be deprived even of what he has.

13 The reason I talk to them in parables is that they look without seeing and listen without hearing or understanding.

14 So in their case what was spoken by the prophet Isaiah is being fulfilled: Listen and listen, but never understand! Look and look, but never perceive!

15 This people's heart has grown coarse, their ears dulled, they have shut their eyes tight to avoid using their eyes to see, their ears to hear, their heart to understand, changing their ways and being healed by me.

17 In truth I tell you, many prophets and upright people longed to see what you see, and never saw it; to hear what you hear, and never heard it.

18 'So pay attention to the parable of the sower.

19 When anyone hears the word of the kingdom without understanding, the Evil One comes and carries off what was sown in his heart: this is the seed sown on the edge of the path.

20 The seed sown on patches of rock is someone who hears the word and welcomes it at once with joy.

21 But such a person has no root deep down and does not last; should some trial come, or some persecution on account of the word, at once he falls away.

22 The seed sown in thorns is someone who hears the word, but the worry of the world and the lure of riches choke the word and so it produces nothing.

23 And the seed sown in rich soil is someone who hears the word and understands it; this is the one who yields a harvest and produces now a hundredfold, now sixty, now thirty.'

18 In my estimation, all that we suffer in the present time is nothing in comparison with the glory which is destined to be disclosed for us,

19 for the whole creation is waiting with eagerness for the children of God to be revealed.

20 It was not for its own purposes that creation had frustration imposed on it, but for the purposes of him who imposed it-

21 with the intention that the whole creation itself might be freed from its slavery to corruption and brought into the same glorious freedom as the children of God.

22 We are well aware that the whole creation, until this time, has been groaning in labour pains.

23 And not only that: we too, who have the first-fruits of the Spirit, even we are groaning inside ourselves, waiting with eagerness for our bodies to be set free.