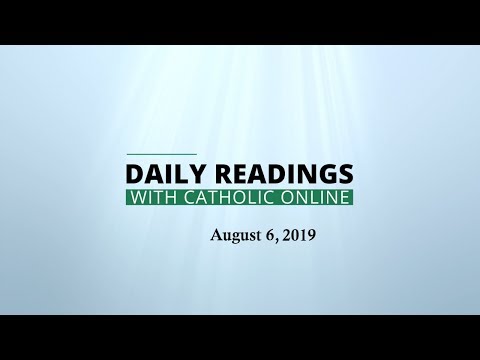 1 Yahweh is king! Let earth rejoice, the many isles be glad!

2 Cloud, black cloud enfolds him, saving justice and judgement the foundations of his throne.

5 The mountains melt like wax, before the Lord of all the earth.

6 The heavens proclaim his saving justice, all nations see his glory.

9 For you are Yahweh, Most High over all the earth, far transcending all gods.

28 Now about eight days after this had been said, he took with him Peter, John and James and went up the mountain to pray.

29 And it happened that, as he was praying, the aspect of his face was changed and his clothing became sparkling white.

30 And suddenly there were two men talking to him; they were Moses and Elijah

31 appearing in glory, and they were speaking of his passing which he was to accomplish in Jerusalem.

32 Peter and his companions were heavy with sleep, but they woke up and saw his glory and the two men standing with him.

33 As these were leaving him, Peter said to Jesus, 'Master, it is wonderful for us to be here; so let us make three shelters, one for you, one for Moses and one for Elijah.' He did not know what he was saying.

34 As he was saying this, a cloud came and covered them with shadow; and when they went into the cloud the disciples were afraid.

35 And a voice came from the cloud saying, 'This is my Son, the Chosen One. Listen to him.'

36 And after the voice had spoken, Jesus was found alone. The disciples kept silence and, at that time, told no one what they had seen.

16 When we told you about the power and the coming of our Lord Jesus Christ, we were not slavishly repeating cleverly invented myths; no, we had seen his majesty with our own eyes.

17 He was honoured and glorified by God the Father, when a voice came to him from the transcendent Glory, This is my Son, the Beloved; he enjoys my favour.

18 We ourselves heard this voice from heaven, when we were with him on the holy mountain.

19 So we have confirmation of the words of the prophets; and you will be right to pay attention to it as to a lamp for lighting a way through the dark, until the dawn comes and the morning star rises in your minds.