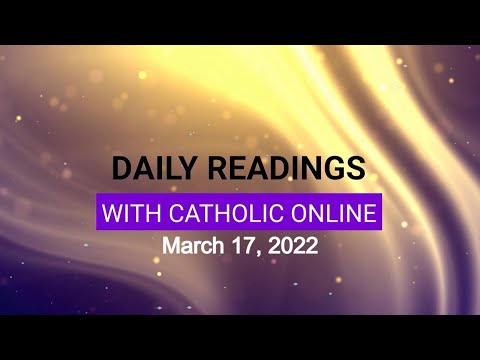 5 Yahweh says this, 'Accursed be anyone who trusts in human beings, who relies on human strength and whose heart turns from Yahweh.

6 Such a person is like scrub in the wastelands: when good comes, it does not affect him since he lives in the parched places of the desert, uninhabited, salt land.

7 'Blessed is anyone who trusts in Yahweh, with Yahweh to rely on.

8 Such a person is like a tree by the waterside that thrusts its roots to the stream: when the heat comes it has nothing to fear, its foliage stays green; untroubled in a year of drought, it never stops bearing fruit.

9 'The heart is more devious than any other thing, and is depraved; who can pierce its secrets?

10 I, Yahweh, search the heart, test the motives, to give each person what his conduct and his actions deserve.

19 'There was a rich man who used to dress in purple and fine linen and feast magnificently every day.

20 And at his gate there used to lie a poor man called Lazarus, covered with sores,

21 who longed to fill himself with what fell from the rich man's table. Even dogs came and licked his sores.

22 Now it happened that the poor man died and was carried away by the angels into Abraham's embrace. The rich man also died and was buried.

23 'In his torment in Hades he looked up and saw Abraham a long way off with Lazarus in his embrace.

24 So he cried out, "Father Abraham, pity me and send Lazarus to dip the tip of his finger in water and cool my tongue, for I am in agony in these flames."

25 Abraham said, "My son, remember that during your life you had your fill of good things, just as Lazarus his fill of bad. Now he is being comforted here while you are in agony.

26 But that is not all: between us and you a great gulf has been fixed, to prevent those who want to cross from our side to yours or from your side to ours."

27 'So he said, "Father, I beg you then to send Lazarus to my father's house,

28 since I have five brothers, to give them warning so that they do not come to this place of torment too."

29 Abraham said, "They have Moses and the prophets, let them listen to them."

30 The rich man replied, "Ah no, father Abraham, but if someone comes to them from the dead, they will repent."

31 Then Abraham said to him, "If they will not listen either to Moses or to the prophets, they will not be convinced even if someone should rise from the dead."