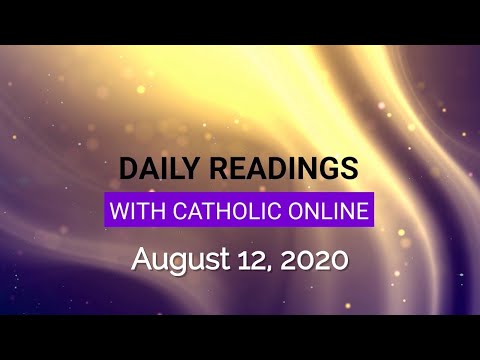 1 Then he shouted loudly for me to hear, 'The scourges of the city are approaching, each carrying his weapon of destruction!'

2 Immediately six men advanced from the upper north gate, each holding a deadly weapon. Among them was a man dressed in linen, with a scribe's ink-horn in his belt. They came in and halted in front of the bronze altar.

3 The glory of the God of Israel rose from above the winged creature where it had been, towards the threshold of the Temple. He called to the man dressed in linen with a scribe's ink-horn in his belt

4 and Yahweh said to him, 'Go all through the city, all through Jerusalem, and mark a cross on the foreheads of all who grieve and lament over all the loathsome practices in it.'

5 I heard him say to the others, 'Follow him through the city and strike. Not one glance of pity; show no mercy;

6 old men, young men, girls, children, women, kill and exterminate them all. But do not touch anyone with a cross on his forehead. Begin at my sanctuary.' So they began with the old men who were in the Temple.

7 He said to them, 'Defile the Temple; fill the courts with corpses; then go out!' They went out and hacked their way through the city.

18 The glory of Yahweh then came out over the Temple threshold and paused over the winged creatures.

19 These raised their wings and rose from the ground as I watched, and the wheels were beside them. They paused at the entrance to the east gate of the Temple of Yahweh, with the glory of the God of Israel over them, above.

21 Each had four faces and four wings and what seemed to be human hands under their wings.

22 Their faces were like those I had seen by the River Chebar. Each one moved straight forward.

1 Alleluia! Praise, servants of Yahweh, praise the name of Yahweh.

2 Blessed be the name of Yahweh, henceforth and for ever.

3 From the rising of the sun to its setting, praised be the name of Yahweh!

4 Supreme over all nations is Yahweh, supreme over the heavens his glory.

5 Who is like Yahweh our God? His throne is set on high,

6 but he stoops to look down on heaven and earth.

15 'If your brother does something wrong, go and have it out with him alone, between your two selves. If he listens to you, you have won back your brother.

16 If he does not listen, take one or two others along with you: whatever the misdemeanour, the evidence of two or three witnesses is required to sustain the charge.

19 'In truth I tell you once again, if two of you on earth agree to ask anything at all, it will be granted to you by my Father in heaven.

20 For where two or three meet in my name, I am there among them.'