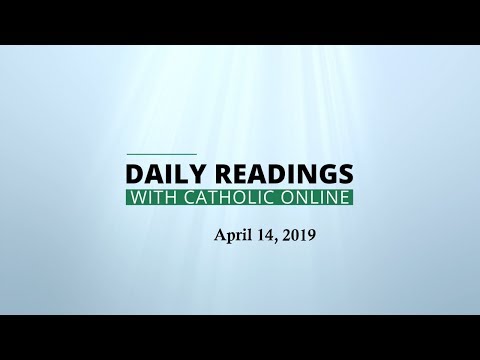 4 Lord Yahweh has given me a disciple's tongue, for me to know how to give a word of comfort to the weary. Morning by morning he makes my ear alert to listen like a disciple.

5 Lord Yahweh has opened my ear and I have not resisted, I have not turned away.

6 I have offered my back to those who struck me, my cheeks to those who plucked my beard; I have not turned my face away from insult and spitting.

7 Lord Yahweh comes to my help, this is why insult has not touched me, this is why I have set my face like flint and know that I shall not be put to shame.

8 'He trusted himself to Yahweh, let Yahweh set him free! Let him deliver him, as he took such delight in him.'

9 It was you who drew me from the womb and soothed me on my mother's breast.

17 I can count every one of my bones, while they look on and gloat;

18 they divide my garments among them and cast lots for my clothing.

19 Yahweh, do not hold aloof! My strength, come quickly to my help,

20 rescue my soul from the sword, the one life I have from the grasp of the dog!

24 For he has not despised nor disregarded the poverty of the poor, has not turned away his face, but has listened to the cry for help.

1 The whole assembly then rose, and they brought him before Pilate.

2 They began their accusation by saying, 'We found this man inciting our people to revolt, opposing payment of the tribute to Caesar, and claiming to be Christ, a king.'

3 Pilate put to him this question, 'Are you the king of the Jews?' He replied, 'It is you who say it.'

4 Pilate then said to the chief priests and the crowd, 'I find no case against this man.'

5 But they persisted, 'He is inflaming the people with his teaching all over Judaea and all the way from Galilee, where he started, down to here.'

6 When Pilate heard this, he asked if the man were a Galilean;

7 and finding that he came under Herod's jurisdiction, he passed him over to Herod, who was also in Jerusalem at that time.

8 Herod was delighted to see Jesus; he had heard about him and had been wanting for a long time to set eyes on him; moreover, he was hoping to see some miracle worked by him.

9 So he questioned him at some length, but without getting any reply.

10 Meanwhile the chief priests and the scribes were there, vigorously pressing their accusations.

11 Then Herod, together with his guards, treated him with contempt and made fun of him; he put a rich cloak on him and sent him back to Pilate.

12 And though Herod and Pilate had been enemies before, they were reconciled that same day.

13 Pilate then summoned the chief priests and the leading men and the people.

14 He said to them, 'You brought this man before me as a popular agitator. Now I have gone into the matter myself in your presence and found no grounds in the man for any of the charges you bring against him.

15 Nor has Herod either, since he has sent him back to us. As you can see, the man has done nothing that deserves death,

16 so I shall have him flogged and then let him go.'

18 But as one man they howled, 'Away with him! Give us Barabbas!'

19 (This man had been thrown into prison because of a riot in the city and murder.)

20 In his desire to set Jesus free, Pilate addressed them again,

22 And for the third time he spoke to them, 'But what harm has this man done? I have found no case against him that deserves death, so I shall have him flogged and then let him go.'

23 But they kept on shouting at the top of their voices, demanding that he should be crucified. And their shouts kept growing louder.

24 Pilate then gave his verdict: their demand was to be granted.

25 He released the man they asked for, who had been imprisoned because of rioting and murder, and handed Jesus over to them to deal with as they pleased.

26 As they were leading him away they seized on a man, Simon from Cyrene, who was coming in from the country, and made him shoulder the cross and carry it behind Jesus.

27 Large numbers of people followed him, and women too, who mourned and lamented for him.

28 But Jesus turned to them and said, 'Daughters of Jerusalem, do not weep for me; weep rather for yourselves and for your children.

31 For if this is what is done to green wood, what will be done when the wood is dry?'

32 Now they were also leading out two others, criminals, to be executed with him.

33 When they reached the place called The Skull, there they crucified him and the two criminals, one on his right, the other on his left.

34 Jesus said, 'Father, forgive them; they do not know what they are doing.' Then they cast lots to share out his clothing.

35 The people stayed there watching. As for the leaders, they jeered at him with the words, 'He saved others, let him save himself if he is the Christ of God, the Chosen One.'

36 The soldiers mocked him too, coming up to him, offering him vinegar,

37 and saying, 'If you are the king of the Jews, save yourself.'

38 Above him there was an inscription: 'This is the King of the Jews'.

39 One of the criminals hanging there abused him: 'Are you not the Christ? Save yourself and us as well.'

40 But the other spoke up and rebuked him. 'Have you no fear of God at all?' he said. 'You got the same sentence as he did,

41 but in our case we deserved it: we are paying for what we did. But this man has done nothing wrong.'

42 Then he said, 'Jesus, remember me when you come into your kingdom.'

43 He answered him, 'In truth I tell you, today you will be with me in paradise.'

44 It was now about the sixth hour and the sun's light failed, so that darkness came over the whole land until the ninth hour.

45 The veil of the Sanctuary was torn right down the middle.

46 Jesus cried out in a loud voice saying, 'Father, into your hands I commit my spirit.' With these words he breathed his last.

47 When the centurion saw what had taken place, he gave praise to God and said, 'Truly, this was an upright man.'

48 And when all the crowds who had gathered for the spectacle saw what had happened, they went home beating their breasts.

49 All his friends stood at a distance; so also did the women who had accompanied him from Galilee and saw all this happen.