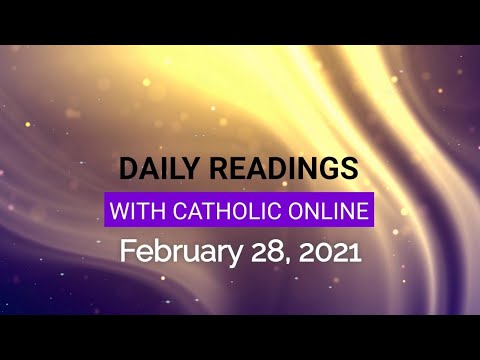 10 My trust does not fail even when I say, 'I am completely wretched.'

15 Costly in Yahweh's sight is the death of his faithful.

17 I shall offer you a sacrifice of thanksgiving and call on the name of Yahweh.

18 I shall fulfil my vows to Yahweh, witnessed by all his people,

19 in the courts of the house of Yahweh, in your very heart, Jerusalem.

2 Six days later, Jesus took with him Peter and James and John and led them up a high mountain on their own by themselves. There in their presence he was transfigured:

3 his clothes became brilliantly white, whiter than any earthly bleacher could make them.

4 Elijah appeared to them with Moses; and they were talking to Jesus.

5 Then Peter spoke to Jesus, 'Rabbi,' he said, 'it is wonderful for us to be here; so let us make three shelters, one for you, one for Moses and one for Elijah.'

6 He did not know what to say; they were so frightened.

7 And a cloud came, covering them in shadow; and from the cloud there came a voice, 'This is my Son, the Beloved. Listen to him.'

8 Then suddenly, when they looked round, they saw no one with them any more but only Jesus.

9 As they were coming down from the mountain he warned them to tell no one what they had seen, until after the Son of man had risen from the dead.

10 They observed the warning faithfully, though among themselves they discussed what 'rising from the dead' could mean.

31 After saying this, what can we add? If God is for us, who can be against us?

32 Since he did not spare his own Son, but gave him up for the sake of all of us, then can we not expect that with him he will freely give us all his gifts?

33 Who can bring any accusation against those that God has chosen? When God grants saving justice

34 who can condemn? Are we not sure that it is Christ Jesus, who died -- yes and more, who was raised from the dead and is at God's right hand -- and who is adding his plea for us?