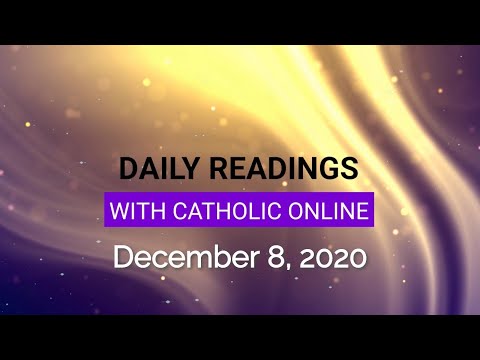 20 The man named his wife 'Eve' because she was the mother of all those who live.

1 [Psalm] Sing a new song to Yahweh, for he has performed wonders, his saving power is in his right hand and his holy arm.

2 Yahweh has made known his saving power, revealed his saving justice for the nations to see,

3 mindful of his faithful love and his constancy to the House of Israel. The whole wide world has seen the saving power of our God.

4 Acclaim Yahweh, all the earth, burst into shouts of joy!

26 In the sixth month the angel Gabriel was sent by God to a town in Galilee called Nazareth,

27 to a virgin betrothed to a man named Joseph, of the House of David; and the virgin's name was Mary.

28 He went in and said to her, 'Rejoice, you who enjoy God's favor! The Lord is with you.'

29 She was deeply disturbed by these words and asked herself what this greeting could mean,

30 but the angel said to her, 'Mary, do not be afraid; you have won God's favour.

31 Look! You are to conceive in your womb and bear a son, and you must name him Jesus.

32 He will be great and will be called Son of the Most High. The Lord God will give him the throne of his ancestor David;

33 he will rule over the House of Jacob for ever and his reign will have no end.'

34 Mary said to the angel, 'But how can this come about, since I have no knowledge of man?'

35 The angel answered, 'The Holy Spirit will come upon you, and the power of the Most High will cover you with its shadow. And so the child will be holy and will be called Son of God.

36 And I tell you this too: your cousin Elizabeth also, in her old age, has conceived a son, and she whom people called barren is now in her sixth month,

37 for nothing is impossible to God.'

38 Mary said, 'You see before you the Lord's servant, let it happen to me as you have said.' And the angel left her.

3 Blessed be God the Father of our Lord Jesus Christ, who has blessed us with all the spiritual blessings of heaven in Christ.

4 Thus he chose us in Christ before the world was made to be holy and faultless before him in love,

5 marking us out for himself beforehand, to be adopted sons, through Jesus Christ. Such was his purpose and good pleasure,

6 to the praise of the glory of his grace, his free gift to us in the Beloved,

11 And it is in him that we have received our heritage, marked out beforehand as we were, under the plan of the One who guides all things as he decides by his own will,

12 chosen to be, for the praise of his glory, the people who would put their hopes in Christ before he came.