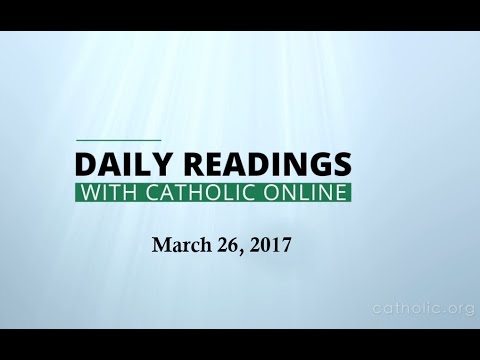 1 Yahweh said to Samuel, 'How much longer do you mean to go on mourning over Saul, now that I myself have rejected him as ruler of Israel? Fill your horn with oil and go. I am sending you to Jesse of Bethlehem, for I have found myself a king from among his sons.'

6 When they arrived, he looked at Eliab and thought, 'This must be Yahweh's anointed now before him,'

7 but Yahweh said to Samuel, 'Take no notice of his appearance or his height, for I have rejected him; God does not see as human beings see; they look at appearances but Yahweh looks at the heart.'

10 Jesse thus presented seven of his sons to Samuel, but Samuel said to Jesse, 'Yahweh has not chosen these.'

11 He then asked Jesse, 'Are these all the sons you have?' Jesse replied, 'There is still one left, the youngest; he is looking after the sheep.' Samuel then said to Jesse, 'Send for him, for we shall not sit down to eat until he arrives.'

12 Jesse had him sent for; he had ruddy cheeks, with fine eyes and an attractive appearance. Yahweh said, 'Get up and anoint him: he is the one!'

13 At this, Samuel took the horn of oil and anointed him, surrounded by his brothers; and the spirit of Yahweh seized on David from that day onwards. Samuel, for his part, set off and went to Ramah.

1 As he went along, he saw a man who had been blind from birth.

2 His disciples asked him, 'Rabbi, who sinned, this man or his parents, that he should have been born blind?'

3 'Neither he nor his parents sinned,' Jesus answered, 'he was born blind so that the works of God might be revealed in him.

4 'As long as day lasts we must carry out the work of the one who sent me; the night will soon be here when no one can work.

5 As long as I am in the world I am the light of the world.'

6 Having said this, he spat on the ground, made a paste with the spittle, put this over the eyes of the blind man,

7 and said to him, 'Go and wash in the Pool of Siloam' (the name means 'one who has been sent'). So he went off and washed and came back able to see.

8 His neighbours and the people who used to see him before (for he was a beggar) said, 'Isn't this the man who used to sit and beg?'

10 So they said to him, 'Then how is it that your eyes were opened?'

11 He answered, 'The man called Jesus made a paste, daubed my eyes with it and said to me, "Go off and wash at Siloam"; so I went, and when I washed I gained my sight.'

13 They brought to the Pharisees the man who had been blind.

14 It had been a Sabbath day when Jesus made the paste and opened the man's eyes,

15 so when the Pharisees asked him how he had gained his sight, he said, 'He put a paste on my eyes, and I washed, and I can see.'

16 Then some of the Pharisees said, 'That man cannot be from God: he does not keep the Sabbath.' Others said, 'How can a sinner produce signs like this?' And there was division among them.

17 So they spoke to the blind man again, 'What have you to say about him yourself, now that he has opened your eyes?' The man answered, 'He is a prophet.'

18 However, the Jews would not believe that the man had been blind without first sending for the parents of the man who had gained his sight and

19 asking them, 'Is this man really the son of yours who you say was born blind? If so, how is it that he is now able to see?'

20 His parents answered, 'We know he is our son and we know he was born blind,

21 but how he can see, we don't know, nor who opened his eyes. Ask him. He is old enough: let him speak for himself.'

22 His parents spoke like this out of fear of the Jews, who had already agreed to ban from the synagogue anyone who should acknowledge Jesus as the Christ.

24 So the Jews sent for the man again and said to him, 'Give glory to God! We are satisfied that this man is a sinner.'

25 The man answered, 'Whether he is a sinner I don't know; all I know is that I was blind and now I can see.'

27 He replied, 'I have told you once and you wouldn't listen. Why do you want to hear it all again? Do you want to become his disciples yourselves?'

28 At this they hurled abuse at him, 'It is you who are his disciple, we are disciples of Moses:

29 we know that God spoke to Moses, but as for this man, we don't know where he comes from.'

30 The man replied, 'That is just what is so amazing! You don't know where he comes from and he has opened my eyes!

31 We know that God doesn't listen to sinners, but God does listen to people who are devout and do his will.

32 Ever since the world began it is unheard of for anyone to open the eyes of someone born blind;

33 if this man were not from God, he wouldn't have been able to do anything.'

34 They retorted, 'Are you trying to teach us, and you a sinner through and through ever since you were born!' And they ejected him.

35 Jesus heard they had ejected him, and when he found him he said to him, 'Do you believe in the Son of man?'

39 Jesus said: It is for judgement that I have come into this world, so that those without sight may see and those with sight may become blind.

40 Hearing this, some Pharisees who were present said to him, 'So we are blind, are we?'

41 Jesus replied: If you were blind, you would not be guilty, but since you say, 'We can see,' your guilt remains.

8 You were darkness once, but now you are light in the Lord; behave as children of light,

9 for the effects of the light are seen in complete goodness and uprightness and truth.

10 Try to discover what the Lord wants of you,

11 take no part in the futile works of darkness but, on the contrary, show them up for what they are.

12 The things which are done in secret are shameful even to speak of;

13 but anything shown up by the light will be illuminated

14 and anything illuminated is itself a light. That is why it is said: Wake up, sleeper, rise from the dead, and Christ will shine on you.