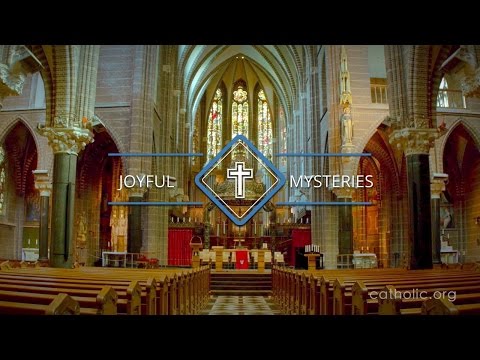 Mysteries Of The Rosary Holy Card

Mysteries Of The Rosary Holy Card

The Annunciation of the Lord to Mary

I was in prayer: it was evening. I was praying towards Jerusalem because my people prayed three times a day, morning, noon, and evening facing Jerusalem. I was praying for the Liberation of my people. I was praying that soon the Messiah would come to take away all hatred: to take away all sins from my people. As I was praying, there suddenly appeared an angel. At first I was afraid because it was the first time an angel had ever come to me. When I heard him say "Hail, full of grace, the Lord is with you" I was very confused at this greeting and yet I was very humbled that an angel would call me full of grace: that I had gained favor from God: that I was called to bear His Son. I asked the angel how this could happen? I am a virgin: I had intended to be a virgin the rest of my life even though I agreed to live with Joseph. The angel assured me, "The Holy Spirit will come upon you: the shadow of the Most High will enwrap you and the child to be born of you will be called Son of God." At that instance, I remembered the prophesy of Isaiah. The prophesy of the Messiah. The prophesy that He would be a suffering servant. A servant rejected by His own people and yet raised by God. Knowing that, I said, "Behold the handmaid, the servant of the Lord: be it done to me according to Your word."

My children, be always open to seek the will of God in your life no matter what it is. Never be afraid of God's will. God's will always does contain suffering but God's will also brings peace. God's will contains Joy. Pray to the Heavenly Father: pray that He will give you the grace through my prayers to accept His will in all things. Place yourself at God's disposal and He will do great things for you and with you.

The Visitation of Mary to Elizabeth

As soon as I realized by Gabriel's message that Elizabeth, my cousin, who had been barren for a long time and who was yet now old, had nonetheless conceived, I was prompted by God's grace to go to help her in her need. She was in her sixth month: I went from Nazareth to Judea. I was only pondering the message that the angel had given me. It all seemed so wonderful that God would use me for His kingdom; for His glory. As I arrived at Zechariah's house, I greeted Elizabeth. I had heard that Zechariah had become mute: he had doubted the Lord: he doubted that God could work a miracle in his life. As I entered and greeted Elizabeth, Elizabeth shouted for joy and said, "Blessed are you among all women and blessed is the fruit of your womb. Who am I that the Mother of my Lord should come to me." Out of Elizabeth's mouth came the confirmation of Gabriel's message: that I had conceived the Son of God and later all ages were to proclaim me as blessed as the Mother of their Lord; the Mother of God. I began to sing the hymn of praise that came from my heart. I was so filled with God's Love that I had to share my Joy with Elizabeth and her house hold.

My children, never doubt that God can work a miracle in your Life even if things seem humanly impossible: all things are possible with God. Trust Him, trust Him my children. As I visited Elizabeth out of love, I wish to visit you out of love. I wish to come into your situation whatever it may be: to be present with you and to pray with you and for you. God will manifest His power if we believe. Elizabeth told me, "Blessed are you who have believed that the Lord's words would be fulfilled in you." Trust in the Lord. I am with you to pray with you. Offer this mystery to the Heavenly Father that He will also work a miracle of grace in your life: ask the Heavenly Father for the gift of faith and absolute trust in His work. I am praying with you and for you.

The Nativity of our Lord Jesus Christ

Joseph and I came to Bethlehem because there was a decree that all should go to their ancestral town to be registered. In obedience, Joseph and I went. God even used the oppression of the Roman government to bring about your salvation: because in this time of oppression, my Son, your Savior, was born. We looked for a place but there was no room in the inn: the town was so full. What was offered us was a stable not too far from where the shepherds were guarding their flock. It was soon that my Son was born: that the King of Kings would be born a pauper. It was soon that the very Word would be made flesh. Joseph left me in the stable and went outside for a while thinking that he was not worthy to be present at such a great miracle. While he was thinking, the moment came when my Son was introduced to the world. Because of the immensity of Love that the Lord had filled me with, I felt no pain at His birth. There was pure joy at the coming of my Son. I held Him in my arms: He was the very Savior of the world. A while later, Joseph came in, he saw me with the Child and he was also filled with wondrous joy. As some time past, the shepherds that were near the stable also came. They knew about the birth of my Son: the angels had told them. Heaven was rejoicing at the birth of my Son.

My children, look upon the greatness of your Lord Who has loved you so much as to come down to show the immensity of His Love for you. Show your immensity of love for Him: be humble, be grateful for what you have, be it little or great, and whatever you do have, use it in a way that will give pleasure to my Son. See the face of my Son in those in need, those in want, and respond in love to Him. Pray to the Heavenly Father in this mystery for the gift of simplicity and for the woes of the poor and I will pray with you. I will ask the Father to give you the grace to be generous with those less fortunate.

The Presentation of our Lord

In obedience to the Law of Moses, forty days after my Son was born, Joseph and I went to Jerusalem to present my Son before the Lord and to redeem Him with two turtle doves. I was presenting to God, the Father, your Redeemer in anticipation of the sacrifice He would make on Calvary for your salvation. When we entered the temple, there was a holy priest by the name of Simeon. Simeon took the Child into his arms and said, "Now Lord You can release your servant according to Your word in peace, for my eyes have seen the salvation which You have raised for all peoples to see: a light of revelation to the nations and the glory of Your people Israel." Then Simeon turned to me and said "Blessed are you, woman: but behold this Child will be the fall and the rise of many in Israel, a sign to be opposed and your own heart will be pierced so that the hearts of many will be exposed. " Simeon was talking about my destiny: a destiny that would be so intimate with my Son.

My greatest pain, my children, is that people reject my Son: people reject His message of love and peace. People reject His message of repentance and holiness. My children, ask the Heavenly Father that He will make you holy in all things. Take away from your life whatever is displeasing to God so that your worship at mass and your worshiping prayer will be acceptable to God the Father. I will pray for you in your time of worship. I will pray for you so that your prayer may reach the Father.

Finding Jesus in the Temple at age 12

Jesus was twelve years old and Joseph and I, as custom dictates, wished to take Him to Jerusalem for the Passover. We went and we were filled with joy to worship God with His people. After the days of Passover were done, Joseph and I went back to Nazareth in the caravan of family members and friends that we came in. Joseph went with the men and I with the women. The children were either with their fathers or mothers. Both of us thought that Jesus was with the other. When evening came, Joseph and I came together and we did not find Jesus neither among our relatives nor among our friends. So we decided to go back to Jerusalem to look for Him. My heart was torn in two: the sufferings predicted by Simeon were already starting. "What happened to my Son?" I questioned. It took us two days to go back to Jerusalem and on the third day we found my Son in the temple. He was among a group of elders, rabbis, and He was reading the Law with them. They were discussing the Law of Moses: He astonished the elders who marveled at His insight to the Law. As I was hearing Him, there was an amount of joy: joy to hear my Son teaching. God was giving me a taste of what my Son would be doing during His earthly ministry. I ran up to Him and said, "My Son, why did You do such a thing? Your father and I with so much sorrow have been looking for You." Jesus looked at me with Love and yet with conviction and He said to me, "But why were you looking for Me? Did you not know I should be about My Father's business."

My children, do not cling to anyone that you love. Everyone has a mission, especially your children that God has given to you. Pray for religious vocations. Pray for vocations to the priesthood. Pray that Christian families will be obedient to the Father. Pray for the unity and the strengthening of all Christian families that they will truly bring the Kingdom of the Father to this earth.

Glorious Mystery of the Rosary

Luminous Mystery of the Rosary

Types of Sin
A Guide for Confession
What are Indulgences?
Introduction to Indulgences
Teachings on Indulgences
Norms
Indulgenced Works
Over 3,000 Catholic prayers sorted by topic/keyword. Including morning & night prayers, marriage and basic prayers like Hail Mary, Our Father, Apostles' Creed and many more.