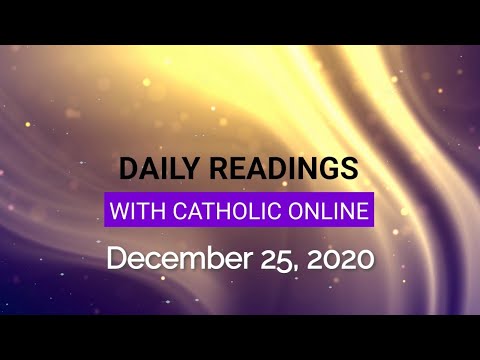 8 The voices of your watchmen! Now they raise their voices, shouting for joy together, for with their own eyes they have seen Yahweh returning to Zion.

9 Break into shouts together, shouts of joy, you ruins of Jerusalem; for Yahweh has consoled his people, he has redeemed Jerusalem.

10 Yahweh has bared his holy arm for all the nations to see, and all the ends of the earth have seen the salvation of our God.

1 [Psalm] Sing a new song to Yahweh, for he has performed wonders, his saving power is in his right hand and his holy arm.

2 Yahweh has made known his saving power, revealed his saving justice for the nations to see,

3 mindful of his faithful love and his constancy to the House of Israel. The whole wide world has seen the saving power of our God.

4 Acclaim Yahweh, all the earth, burst into shouts of joy!

5 Play to Yahweh on the harp, to the sound of instruments;

6 to the sound of trumpet and horn, acclaim the presence of the King.

2 He was with God in the beginning.

4 What has come into being in him was life, life that was the light of men;

5 and light shines in darkness, and darkness could not overpower it.

7 He came as a witness, to bear witness to the light, so that everyone might believe through him.

8 He was not the light, he was to bear witness to the light.

9 The Word was the real light that gives light to everyone; he was coming into the world.

10 He was in the world that had come into being through him, and the world did not recognise him.

11 He came to his own and his own people did not accept him.

12 But to those who did accept him he gave power to become children of God, to those who believed in his name

13 who were born not from human stock or human desire or human will but from God himself.

14 The Word became flesh, he lived among us, and we saw his glory, the glory that he has from the Father as only Son of the Father, full of grace and truth.

15 John witnesses to him. He proclaims: 'This is the one of whom I said: He who comes after me has passed ahead of me because he existed before me.'

16 Indeed, from his fullness we have, all of us, received -- one gift replacing another,

17 for the Law was given through Moses, grace and truth have come through Jesus Christ.

18 No one has ever seen God; it is the only Son, who is close to the Father's heart, who has made him known.

1 At many moments in the past and by many means, God spoke to our ancestors through the prophets; but

2 in our time, the final days, he has spoken to us in the person of his Son, whom he appointed heir of all things and through whom he made the ages.

3 He is the reflection of God's glory and bears the impress of God's own being, sustaining all things by his powerful command; and now that he has purged sins away, he has taken his seat at the right hand of the divine Majesty on high.

4 So he is now as far above the angels as the title which he has inherited is higher than their own name.

5 To which of the angels, then, has God ever said: You are my Son, today I have fathered you, or: I shall be a father to him and he a son to me?

6 Again, when he brings the First-born into the world, he says: Let all the angels of God pay him homage.