A French lexicographer and philosopher ; born at Paris, 1 February, 1801; died there, 2 June, 1881. He studied at the Lycée Louis-le-Grand, Paris, and after graduating with honours, he became secretary to Count Daru. He then studied medicine and he was about to obtain his degree, when his father died and he was compelled to abandon his studies to make a living for his mother, by teaching Greek and Latin for a time. Although he could not be a physician, he was interested in medical studies throughout his life. His first publications deal with medical subjects: "Le choléra oriental" (Paris, 1832), "Les grandes épidémies", an article published in the "Revue des Deux Mondes" (Paris, 1836), "Les œuvres d'histoire naturelle de Goethe" (1838). He founded with Dezeimeris a medical magazine, "L'Expérience" (1837), and translated the "Natural History" of Pliny the Elder (Paris, 1848), the "Handbook of Physiology" by Müller (Paris, 1851), and issued a revised edition of Pierre Nysten's "Dictionnaire de Médecine et de Chirurgie" (Paris, 1854). From 1839 to 1861, he published a translation of the works of Hippocrates. On account of his researches in the scientific field, he was elected to the Académie des Inscriptions et Belles-Lettres in 1839. While pursuing his scientific studies, he was greatly interested in politics. In 1831, having been introduced to Armand Carrel, he had become a regular contributor to the newspaper "Le National" and retained that position up to the Revolution of 1848. Realizing that the political movement was no longer in accordance with his own ideas, he severed his connexions with "Le National" and devoted his entire time to his studies.

Besides his numerous contributions to various reviews, and the publication of his works, Littré founded, in 1867, a new magazine, "La revue de philosophie positive". All this work would have absorbed the entire energy of another man ; but this is only a part of the tremendous production of Littré. While he was busily engaged in all these philosophical and scientific works, this indefatigable worker, in 1839, became a member of the committee entrusted with the duty of continuing the "Histoire littéraire de la France ", a vast undertaking begun in the eighteenth century by the Benedictine monks of the Saint-Maur Congregation, and taken up by the French Institute, after the Revolution. Attracted by that subject, he published a series of articles on history and literature, on comparative philology and study of languages, which were afterwards gathered under the title of "Histoire de la langue française", "Littérature et histoire" (Paris, 1878), "Etudes et glanures" (Paris, 1880). One of his most interesting contributions to philology is a translation of Book I of the Iliad, in verse and in the French language of the thirteenth century. But by far the most important of all his works, which will make his name live forever, is the "Dictionnaire de la langue française", published from 1859 to 1872 (Paris, 5 vols. and a supplement).

In 1871, Littré was elected to the Assemblée Nationale by the Department of Seine and was made a senator for life in 1874. His fame was then exploited by the Radicals who went so far as to induce him to be initiated a Freemason. Much to their surprise, he pronounced, on the occasion of his initiation, a very conservative speech which disappointed the enemies of the Church. In fact, he had never been an implacable opponent to Catholicism. In 1878 he declined the dedication of a certain book because of bitter attacks against the Church. He publicly acknowledged that he "had never been an absolute contemner of Christianity ", and he had, on the contrary, constantly "recognized its lofty character and the benefits that may be derived from it". Towards the end of his life, yielding to the entreaties of his wife and daughter, he had long interviews with Fr. Millériot, S.J., and finally asked to be baptized and he died in the Catholic Church. 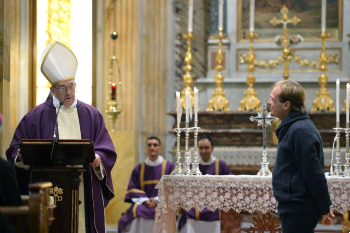