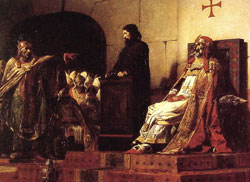 Formosus Formosus was a mysteriously controversial pope. Born c. 815/816, probably in Rome, he become bishop of Porto in 864. King Boris of Bulgaria was so impressed with the bishop that he twice requested Formosus be made metropolitan of Bulgaria. Popes Nicholas I and Adrian II refused to move a bishop from one see to another. Formosus served as papal legate to France and Germany, and in 869, he was a member of the synod that deposed Patriarch Photios of Constantinople. In 875, Pope John VIII sent Formosus to offer the crown of the Holy Roman Empire to Charles II the Bald; the following year, John excommunicated Formosus, whom he accused of treason. John readmitted Formosus to lay communion in 878 on the condition that Formosus stay in exile. Pope Marinus I restored Formosus to the see of Porto. Formosus was elected pope in 891, and after crowning Guido III of Spoleto and his son Lambert co-emperors the next year, the pope appealed to Arnulf, king of the East Franks, to free Rome from the tyranny of its co-emperors. Arnulf was successful, and Formosus crowned him emperor in 896, the year that Formosus died. Six months after the death of his predecessor, Stephen VI had Formosus' corpse brought to trial for capital crimes. When the synod found the dead pope guilty, Stephen had the cadaver stripped of its papal vestments and removed the fingers with which the pope had blessed. Formosus' body was then dragged through the streets of Rome and was eventually thrown into the Tiber. The body was reinterred in 897. Although Sergius III confirmed the decision of the Cadaver Synod nearly ten years later, Pope John XI reinstated the disgraced Formosus about 40 years after his posthumous deposition.