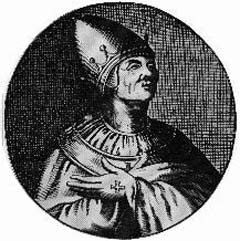 John VIII The first pope to have been assassinated, John VIII is also thought to have been a name substituted for that of Pope Joan. Born in Rome, John was the son of Gundo and was an archdeacon for 20 years before being elected pope in 872. He supported the missionary work of Sts. Cyril and Methodius and eventually approved the use of Slavonic in local worship. In 879, he recognized Photius as Patriarch of Constantinople. The pope had many problems with Saracen raiders and founded the Roman fleet, which he personally commanded. Eventually, he paid tribute to the Saracens to avoid a war. Before his murder in 882, allegedly at the hands of members of the papal household, John crowned two emperors, Charles the Bald and Charles the Fat.