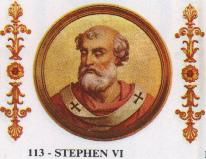 Stephen was the cardinal priest of Saints Quattro Coronati when he was elected pope in 885. He was consecrated without imperial approval, and Charles III the Fat did not approve of his election nor of his coronation without consent. Stephen was able to show Charles' representatives that the king's ambassador had helped him to gain his position. Stephen invited Charles to Rome, but the emperor was deposed before he could accept. Stephen refused to acknowledge Photios as Patriarch of Constantinople and forbade the use of Slavonic in the Moravian church. When Saracens threatened Rome, Stephen asked aid of Arnulf, who had deposed Charles, but Stephen died (891) before military aid arrived.