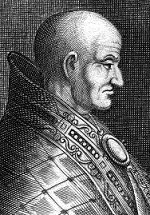 The scion of a noble Roman family, Sergius III (d. 911) was made a deacon by Stephen V/VI and a bishop by Formosus. Sergius was present at Stephen VI/VII's condemnation of Formosus and accepted demotion to deacon. Stephen VI/VII later ordained Sergius a second time. In 897, Sergius was elected to the papacy, but Lambert of Spoleto, who opposed the election, exiled him. With the help of the Duke of Spoleto, Sergius marched on Rome in 904 and ousted Christopher, who had been installed as pope (or anti-pope). Sergius dated his reign from the time of his election, rather than from the time of his regaining the throne. Sergius allowed the fourth marriage of Emperor Leo VI, although the Patriarch of Constantinople had forbidden it. Sergius decreed that all clergy ordained by Formosus were not real clergy and any clergy ordained by someone whom Formosus had ordained was not real. Auxilius, a Frankish priest, erupted in pamphlets of protest. A favorite of Theophylact and his wife Theodora, Sergius is supposed to have been the father of John XI, the son of Marozia, Theophylact's 15-year-old daughter.