English martyr, b. about 1635, d. at Tyburn, 14 July, 1679. He was the third son of William Langhorne of the Inner Temple, by Lettice, daughter of Eustace Needham of Little Wymondley, Herts. He was admitted to the Inner Temple in November, 1646, and called to the bar in 1654. He married a Protestant lady, Dorothy, daughter of Thomas Legatt of Havering, Essex, and lived at Shire Lane, to the right of Temple Bar. His chambers were in Middle Temple Lane. He was arrested on 15 June, 1667, in connection with the great fire. Arrested a second time on 7 October, 1678, and committed to Newgate without any previous examination, he was kept in solitary confinement for eight months. On 14 June, 1679, he was brought to the bar at the Old Bailey; Oates, Dugdale, Bedloe, and Prance gave evidence against him, and he was found guilty. He was offered a pardon, if he would confess his guilt and also make a disclosure of the property of the Jesuits with which he had become acquainted in his professional capacity. This last he did -- probably with the consent of his fellow-prisoner, the provincial, Fr. Whitbread -- but, as he persisted in declaring his ignorance of any conspiracy, he was executed. His last words were to the hangman: "I am desirous to be with my Jesus. I am ready and you need stay no longer for me." 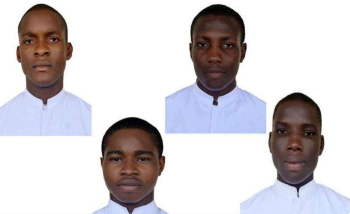