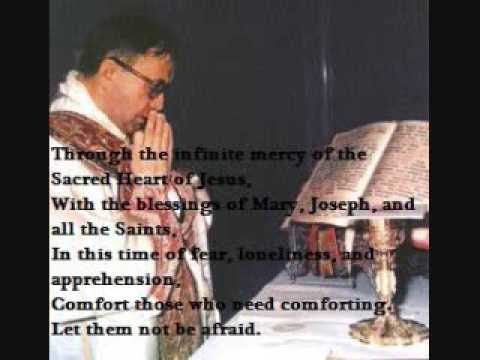 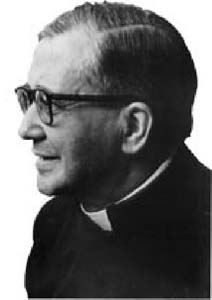 Josemaria Escriva de Balaguer was born in Barbastro, Spain, on January 9, 1902, the second of six children of Jose and Dolores Escriva. Growing up in a devout family and attending Catholic schools, he learned the basic truths of the faith and practices such as frequent confession and communion, the rosary, and almsgiving. The death of three younger sisters, and his father's bankruptcy after business reverses, taught him the meaning of suffering and brought maturity to his outgoing and cheerful temperament. In 1915, the family moved to Logrono, where his father had found new employment.

Beginning in 1918, Josemaria sensed that God was asking something of him, although he didn't know exactly what it was. He decided to become a priest, in order to be available for whatever God wanted of him. He began studying for the priesthood, first in Logrono and later in Saragossa. At his father's suggestion and with the permission of his superiors at the seminary he also began to study civil law. He was ordained a priest and began his pastoral ministry in 1925.

In 1927, Fr. Josemaria moved to Madrid to study for a graduate degree in law. He was accompanied by his mother, sister, and brother, as his father had died in 1924 and he was now head of the family. They were not well-off, and he had to tutor law students to support them. At the same time he carried out a demanding pastoral work, especially among the poor and sick in Madrid, and with young children. He also undertook an apostolate with manual workers, professional people and university students who, by coming into contact with the poor and sick to whom Fr. Josemaria was ministering, learned the practical meaning of charity and their Christian responsibility to help out in the betterment of society.

On October 2, 1928, while making a retreat in Madrid, God showed him his specific mission: he was to found Opus Dei, an institution within the Catholic Church dedicated to helping people in all walks of life to follow Christ, to seek holiness in their daily life and grow in love for God and their fellow men and women. From that moment on, he dedicated all his strength to fulfilling this mission, certain that God had raised up Opus Dei to serve the Church. In 1930, responding to a new illumination from God, he started Opus Dei's apostolic work with women, making clear that they had the same responsibility as men to serve society and the Church.

The first edition of The Way, his most widely read work, was published in 1934 under the title Spiritual Considerations. Expanded and revised, it has gone through many editions since then; more than four million copies in many different languages are now in print. His other spiritual writings include Holy Rosary; The Way of the Cross; two collections of homilies, Christ Is Passing By and Friends of God; and Furrow and The Forge, which like The Way are made up of short points for prayer and reflection.

The development of Opus Dei began among the young people with whom Fr. Josemaria had already been in contact before 1928. Its growth, however, was seriously impeded by the religious persecution inflicted on the Catholic Church during the Spanish Civil War (1936-1939). The founder himself suffered severe hardships under this persecution but, unlike many other priests, he came out of the war alive. After the war, he traveled throughout the country giving retreats to hundreds of priests at the request of their bishops. Meanwhile Opus Dei spread from Madrid to several other Spanish cities, and as soon as World War II ended in 1945, began starting in other countries. This growth was not without pain; though the Work always had the approval of the local bishops, its then-unfamiliar message of sanctity in the world met with some misunderstandings and suspicions-which the founder bore with great patience and charity.

While celebrating Mass in 1943, Fr. Josemaria received a new foundational grace to establish the Priestly Society of the Holy Cross, which made it possible for some of Opus Dei's lay faithful to be ordained as priests. The full incorporation of both lay faithful and priests in Opus Dei, which makes a seamless cooperation in the apostolic work possible, is an essential feature of the foundational charism of Opus Dei, affirmed by the Church in granting Opus Dei the canonical status of a personal Prelature. In addition, the Priestly Society conducts activities, in full harmony with the bishops of the local churches, for the spiritual development of diocesan priests and seminarians. Diocesan priests can also be part of the Priestly Society, while at the same time remaining clergy of their own dioceses.

Aware that God meant Opus Dei to be part of the mission of the universal Church, the founder moved to Rome in 1946 so as to be close to the Holy See. By 1950 the Work had received pontifical approvals affirming its main foundational features-spreading the message of holiness in daily life; service to the Pope, the universal church, and the particular churches; secularity and naturalness; fostering personal freedom and responsibility, and a pluralism consistent with Catholic moral, political, and social teachings.

Beginning in 1948, full membership in Opus Dei was open to married people. In 1950 the Holy See approved the idea of accepting non-Catholics and even non-Christians as cooperators-persons who assist Opus Dei in its projects and programs without being members. The next decade saw the launching of a wide range of undertakings: professional schools, agricultural training centers, universities, primary and secondary schools, hospitals and clinics, and other initiatives, open to people of all races, religions, and social backgrounds but of manifestly Christian inspiration.

During Vatican Council II (1962-1965), Monsignor Escriva worked closely with many of the council fathers, discussing key Council themes such as the universal call to holiness and the importance of laypersons in the mission of the Church. Deeply grateful for the Council's teachings, he did everything possible to implement them in the formative activities offered by Opus Dei throughout the world.

Between 1970 and 1975 the founder undertook catechetical trips throughout Europe and Latin America, speaking with many people, at times in large gatherings, about love of God, the sacraments, Christian dedication, and the need to sanctify work and family life. By the time of the founder's death, Opus Dei had spread to thirty nations on six continents. It now (2002) has more than 84,000 members in sixty countries.

Monsignor Escriva's death in Rome came suddenly on June 26, 1975, when he was 73. Large numbers of bishops and ordinary faithful petitioned the Vatican to begin the process for his beatification and canonization. On May 17, 1992, Pope John Paul II declared him Blessed before a huge crowd in St. Peter's Square. He is to be canonized-formally declared a saint-on October 6, 2002.

Hi readers, it seems you use Catholic Online a lot; that's great! It's a little awkward to ask, but we need your help. If you have already donated, we sincerely thank you. We're not salespeople, but we depend on donations averaging $14.76 and fewer than 1% of readers give. If you donate just $5.00, the price of your coffee, Catholic Online School could keep thriving. Thank you.
Help Now
Continue reading about St. Josemaria Escriva de Balaguer 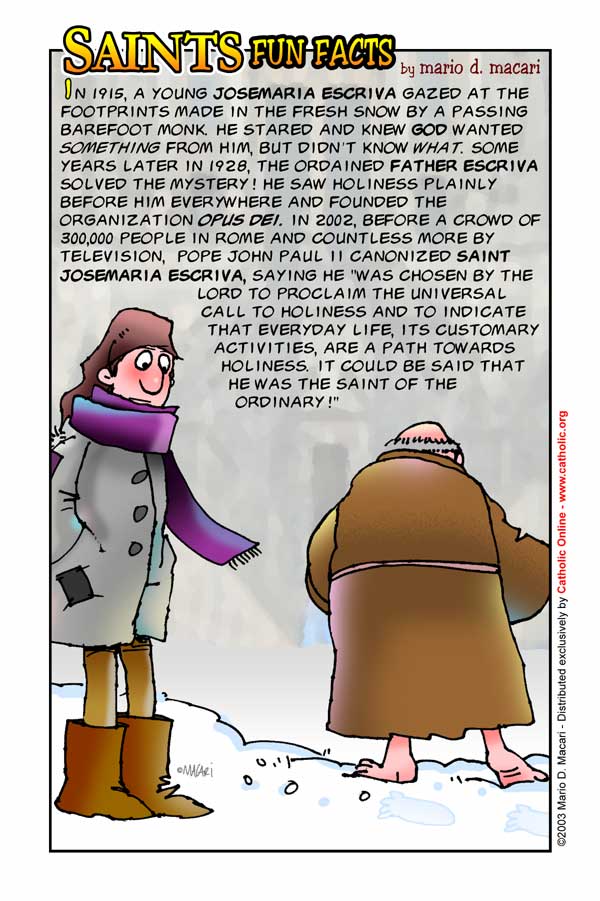