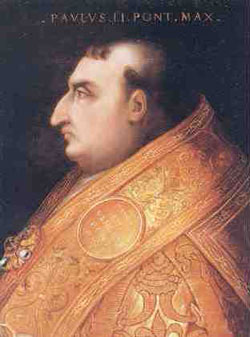 Originally intended for a career in business, Pietro Barbo, born in Venice in 1417, was ordained when his uncle, Eugene IV, was elected to the papacy. Barbo was elected pope in 1464 and took the name Paul, after having been persuaded that his choice, Formosus (Greek for handsome), was not a fortunate one. A lover of carnival and sport, he promulgated the celebration of Holy Year every 25 years, beginning in 1475. Although he forbade Roman children the study of pagan poetry, he restored ancient monuments in Rome and installed the first printing press in Rome. Eager to combat the Turks, he supported Hungarian and Albanian rebels (including Skanderbeg) with the revenues from the alum mines near Toffa. He did not, however, support the the rebellion of George of Podebrady, King of Bohemia, because he had Hussite tendencies and had refused to suppress the Ultraquists. Paul excommunicated the king in 1466. Discouraged by the loss of Negroponte to the Turks, Paul called unsuccessfully for a crusade against the Turks in 1470. At the time of his death the following year, Paul was negotiating a marriage between Ivan III of Russia and the daughter of Thomas Palćlogos.