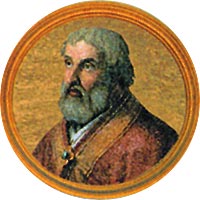 Born Peter Buccaporci in Luna, Italy, Sergius IV made papal name changes common practice. Before his election to the papacy in 1009, he was bishop of Albano. He was known for his kindness to the poor and his support of monasticism. His death in 1012 created suspicion that he had been murdered because both he and his patron, Count John II Crescentius, died within a week of each other.