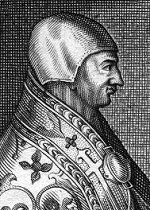 Descended from Roman nobility, Sergius II had been made an acolyte by Leo III, a subdeacon by Stephen IV/V, a cardinal by Paschal I, and an archpriest by Gregory IV. Sergius was elected pope in 844, and when King Lothair sent his son Louis II to rebuke Sergius for his failure to apprise the emperor of his election, Sergius crowned Louis king of the Lombards. Sergius restored the Marcian aqueduct, but he failed to protect Rome from the Saracens, who plundered the city in 846. Sergius died suddenly the following year while trying to make peace between the patriarchs of Grado and Aquileia.