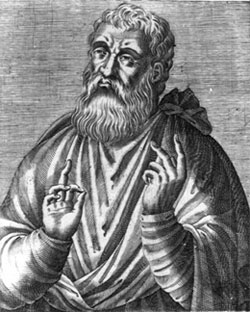 All the voices around Justin clamored that they had the truth he sought so desperately. He had listened to them all since he first came to Rome to get his education. They each shouted that they held the one and only answer but he felt no closer to the truth than when he had started his studies. He had left the Stoic master behind but the Stoics valued discipline as truth and thought discussion of God unnecessary. He had rejected the Peripatetic who seemed more interested in money than discussion. The Pythagorean had rejected him because he didn't know enough music and geometry -- the things that would lead him to truth. He had found some joy with the Platonists because the contemplation of ideas gave wings to his mind, but they had promised wisdom would let him see God and so, where was God?

There was one place that Justin always escaped to in order to get away from these shouting, confusing voices and search out the quiet inner voice that led him to truth. This place was a lonely spot, a path that seemed made for him alone in a field by the sea. So sure was he of the isolation of his retreat that he was shocked one day to find an old man following him.

The old man was not searching for truth but for some of his family. Nonetheless they began a discussion in which Justin identified himself as a philologian, a lover of reason. The old man challenged him -- why was he not a lover of truth, a lover of deeds. Justin told him that reason led to truth, and philosophy led to happiness. This was certainly an interesting thing for Justin to say since he had not found the truth in the study of reason or happiness in his quest among the philosophers! Perhaps the old man sensed this for he asked for Justin's definition of philosophy and of happiness.

In the long discussion that followed, Justin spoke eloquently to the old man's searching questions but even Justin had to admit that philosophers may talk about God but had never seen him, may discuss the soul but didn't really know it. But if the philosophers whom Justin admired and followed couldn't, then nobody could, right?

The old man told him about the ancient prophets, the Hebrew prophets, who had talked not of ideas but of what they had seen and heard, what they knew and experienced. And this was God. The old man ended the conversation by telling Justin to pray that the gates of light be opened to him.

Inflamed by this conversation, Justin sought out the Scriptures and came to love them. Christ words "possess a terrible power in themselves, and are sufficient to inspire those who turn aside from the path of rectitude with awe; while the sweetest rest is afforded those who make a diligent practice of them."

Why hadn't Justin known about Christianity before with as much as he had studied? He had heard about it, the way other pagans of second century Rome had, by the rumors and accusations that surrounded the persecution of Christians. The fearlessness of their actions made him doubt the gossip, but he had nothing else to go by. Christians at that time kept their beliefs secret. They were so afraid that outsiders would trample on their sacred faith and descrate their mysteries that they wouldn't tell anyone about their beliefs -- even to counteract outright lies. To be honest, there was good reason for their fears -- many actors for example performed obscene parodies of Christian ritual for pagan audiences, for example.

But Justin believed differently. He had been one of those outsiders -- not someone looking for trouble, but someone earnestly searching for the truth. The truth had been hidden from him by this fear of theirs. And he believed there were many others like him. He exhorted them that Christians had an obligation to speak of their faith, to witness to others about their faith and their mysteries.

So Justin took his newfound faith to the people. This layman became the first great apologist for Christianity and opened the gates of light for so many others. He explained baptism and Eucharist. He explained to the pagans why they didn't worship idols and why that didn't make them atheists. He explained to the Jews how Christians could worship the same God but not follow Jewish laws. He explained to the Greeks and the philosophers how philosophy did not take into account the dignity of humankind. He wrote long arguments known as apologies and traveled to other lands in order to debate publicly. His long education in philosophy and rhetoric gave him the skills he needed to match his oponents and the Holy Spirit gave him the rest.

It is not surprising that Justin was arrested during the persecution under Marcus Aurelius. Along with four others (Chariton, Charites, Paeon, and Liberianus) he was brought before the Roman prefect, Rusticus, to be accused under the law that required sacrificing to idols. When Rusticus demanded that they "Obey the gods at once, and submit to the kings," Justin responded, "To obey the commandments of our Saviour Jesus Christ is worthy neither of blame nor of condemnation."

When Rusticus asked what doctrines he believed, Justin told him that he had learned all the doctrines available during his quest but finally submitted to the true doctrines of the Christians, even though they didn't please others. (An understatement when he was under danger of death!)

When Rusticus asked where the Christians gathered, Justin gave a response that gives us insight into Christian community and worship of the time: "Where each one chooses and can: for do you fancy that we all meet in the very same place? Not so; because the God of the Christians is not circumscribed by place; but being invisible, fills heaven and earth, and everywhere is worshipped and glorified by the faithful."

Just before Rusticus sentenced them he asked Justin, "If you are killed do you suppose you will go to heaven?" Justin said, "I do not suppose it, but I know and am fully persuaded of it."

Justin and his fellow martyrs were beheaded in the year 165 and went to be with the Truth Justin had longed for all his life. He is often known as Justin Martyr and his works are still available.

Today speak to at least one person about an aspect of the Catholic faith. If you don't feel comfortable discussing Catholic doctrine, read some of the Catechism of the Catholic Church or other competent resource.

Saint Justin Martyr, pray that in our search for the Truth, God will open the gates of light for us the way God did for you and give us the wisdom no human being can give. Amen