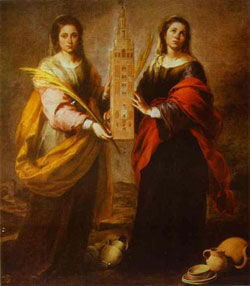 St. Justa and St. Rufina, Virgins and Martyrs (Feast - July 19) These martyrs were two Christian women at Seville in Spain who maintained themselves by selling earthenware. Not to concur in idolatrous superstitions, they refused to sell vessels for the use of heathen ceremonies and when the worshipers broke up their stock-in-trade, Justa and Rufina retorted by overthrowing the image of a false goddess. Whereupon the people impeached them for their faith before the governor. The prefect, after they had boldly confessed Christ, commanded them to be stretched on the rack and their sides to be torn with hooks. An idol was placed near the rack with incense, that if they would offer sacrifice they should be released; but their fidelity was not to be shaken. Justa died on the rack; the judge ordered Rufina to be strangled, and their bodies to be burned. They are greatly venerated in Spain, and no doubt their names represent historical martyrs in that place. But their Acts are unreliable and one of the martyrs appears to have undergone a change of sex in the course of the ages, for Justa was originally called Justus.