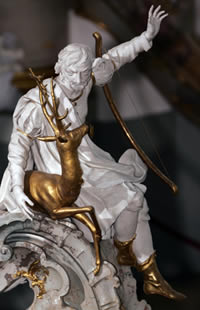 St. Eustachius called by the Greeks Eustachius, and before his conversion named Placidus, was a nobleman who suffered martyrdom at Rome, about the reign of Adrian together with his wife Theopista, called before her baptism Tatiana, and two sons Agapius and Theopistus. These Greek names they must have taken after their conversion to the faith. The ancient sacramentaries mention in the prayer for the festival of St. Eustachius his profuse charities to the poor on whom he bestowed all his large possessions some time before he laid down his life for his faith. An ancient church in Rome was built in his honor, with the title of a Diacony; the same now gives title to a cardinal. His body lay deposited in this church, till, in the twelfth age, it was translated to that of St. Denis near Paris. His shrine was pillaged in this place, and part of his bones burnt by the Huguenots in 1567; but a portion of them still remains in the parish church which bears the name of St. Eustachius in Paris     How noble is it to see integrity and virtue triumphing over interest, passion, racks, and death and setting the whale world at defiance! To see a great man preferring the least duty of justice, truth, or religion, to the favor or menace of princes; readily quitting estate, friends, country, and life, rather than consent to any thing against his conscience, and at the same time, meek, humble, and modest in his sufferings; forgiving from his heart and tenderly loving his most unjust and treacherous enemies and persecutors! Passion and revenge often make men furious; and the lust of power, worldly honor, applause, or wealth may prompt them to brave dangers; but these passions leave them weak and dastardly in other eases, and are themselves the basest slavery, and most grievous crimes and misery 2E Religion is the only basis on which true magnanimity and courage can stand. It so enlightens the mind as to set a man above all human events, and to preserve him in all changes and trials steadily and calm in himself; it secures him against the errors, the injustices, and frowns of the world, is by its powerful motives the strongest spur to all generous actions, and under afflictions and sufferings a source of unalterable peace, and overflowing joy which spring from an assured confidence that God's will is always most just and holy, and that he will be its protector and rewarder. Does religion exert this powerful influences in us? Does it appear in our hearts, in our actions and conduct? It is not enough to encounter dangers with resolution; we must with equal courage and constancy vanquish pleasure and the softer passions, or we possess not the virtue of true fortitude.

Hi readers, it seems you use Catholic Online a lot; that's great! It's a little awkward to ask, but we need your help. If you have already donated, we sincerely thank you. We're not salespeople, but we depend on donations averaging $14.76 and fewer than 1% of readers give. If you donate just $5.00, the price of your coffee, Catholic Online School could keep thriving. Thank you. Help Now >
Continue reading about St. Eustachius