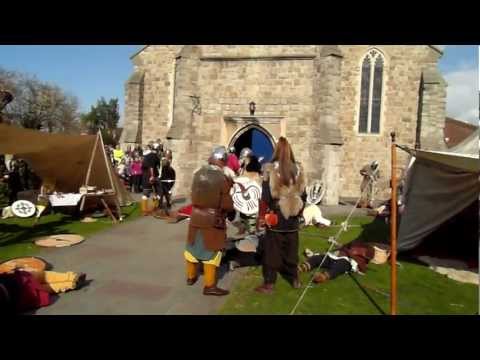 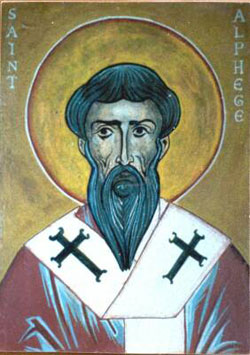 Archbishop and "the First Martyr of Canterbury." He was born in 953 and became a monk in the Deerhurst Monastery in Gloucester, England, asking after a few years to become a hermit. He received permission for this vocation and retired to a small hut near Somerset, England. In 984 Alphege assumed the role of abbot of the abbey of Bath, founded by St. Dunstan and by his own efforts. Many of his disciples from Somerset joined him at Bath. In that same year, Alphege succeeded Ethelwold as bishop of Winchester. He served there for two decades, famed for his care of the poor and for his own austere life. King Aethelred the Unready used his abilities in 994, sending him to mediate with invading Danes. The Danish chieftain Anlaf converted to Christianity as a result of his meetings with Alphege, although he and the other chief, Swein, demanded tribute from the Anglo-Saxons of the region. Anlaf vowed never to lead his troops against Britain again. In 1005 Alphege became the successor to Aleric as the archbishop of Canterbury, receiving the pallium in Rome from Pope John XVIII. He returned to England in time to be captured by the Danes pillaging the southern regions. The Danes besieged Canterbury and took Alphege captive. The ransom for his release was about three thousand pounds and went unpaid. Alphege refused to give the Danes that much, an act which infuriated them. He was hit with an ax and then beaten to death. Revered as a martyr, Alphege's remains were placed in St. Paul's Church in London. The body, moved to Canterbury in 1023, was discovered to be incorrupt in 1105. Relics of St. Alphege are also in Bath, Glastonbury, Ramsey, Reading, Durham, Yorkminster and in Westminster Abbey. His emblem is an ax, and he is depicted in his pontifical vestments or as a shepherd defending his flock.