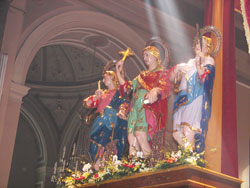 Martyr, one of three brothers from Vaste, Italy, who died with their sister, Benedicta. The details concerning these martyrdoms are traditional, considered by some scholars as unreliable. Alphius, Philadeiphus, Cyrinus, and Benedicta were arrested during the persecutions conducted by Emperor Trajanus Decius. They were tortured in Rome and then taken to Pozzuoli, near modern Naples, where one of the Christians, Onesimus, was executed. The brothers went on to Sicily, where they were martyred at Lentini. Alphius had his tongue torn from his mouth. Philadelphus was burned to death and Cyrinus was boiled to death. The brothers ranged in age from nineteen to twenty-one years of age at the time of their martyrdom. No details of execution are given extant for Benedicta.