Feastday: May 19
Patron: of armorers, goldsmiths, locksmiths, and jewelers 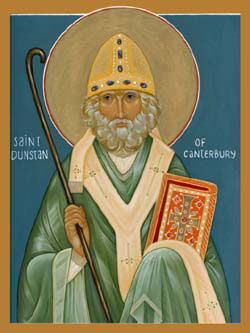 Born of a noble family at Baltonsborough, near Glastonbury, England, Dunstan was educated there by Irish monks and while still a youth, was sent to the court of King Athelstan. He became a Benedictine monk about 934 and was ordained by his uncle, St. Alphege, Bishop of Winchester, about 939. After a time as a hermit at Glastonbury, Dunstan was recalled to the royal court by King Edmund, who appointed him abbot of Glastonbury Abbey in 943. He developed the Abbey into a great center of learning while revitalizing other monasteries in the area. He became advisor to King Edred on his accession to the throne when Edmund was murdered, and began a far-reaching reform of all the monasteries in Edred's realm. Dunstan also became deeply involved in secular politics and incurred the enmity of the West Saxon nobles for denouncing their immorality and for urging peace with the Danes. When Edwy succeeded his uncle Edred as king in 955, he became Dunstan's bitter enemy for the Abbot's strong censure of his scandalous lifestyle. Edwy confiscated his property and banished him from his kingdom. Dunstan went to Ghent in Flanders but soon returned when a rebellion replaced Edwy with his brother Edgar, who appointed Dunstan Bishop of Worcester and London in 957. When Edwy died in 959, the civil strife ended and the country was reunited under Edgar, who appointed Dunstan Archbishop of Canterbury. The king and archbishop then planned a thorough reform of Church and state. Dunstan was appointed legate by Pope John XII, and with St. Ethelwold and St. Oswald, restored ecclesiastical discipline, rebuilt many of the monasteries destroyed by the Danish invaders, replaced inept secular priests with monks, and enforced the widespread reforms they put into effect. Dunstan served as Edgar's chief advisor for sixteen years and did not hesitate to reprimand him when he thought it deserved. When Edgar died, Dunstan helped elect Edward the martyr king and then his half brother Ethelred, when Edward died soon after his election. Under Ethelred, Dunstan's influence began to wane and he retired from politics to Canterbury to teach at the Cathedral school and died there. Dunstan has been called the reviver of monasticism in England. He was a noted musician, played the harp, composed several hymns, notably Kyrie Rex splendens, was a skilled metal worker, and illuminated manuscripts. He is the patron of armorers, goldsmiths, locksmiths, and jewelers. His feast day is May 19th.