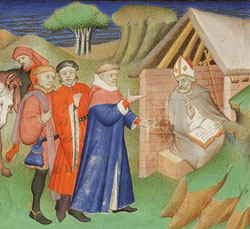 Hi readers, it seems you use Catholic Online a lot; that's great! It's a little awkward to ask, but we need your help. If you have already donated, we sincerely thank you. We're not salespeople, but we depend on donations averaging $14.76 and fewer than 1% of readers give. If you donate just $5.00, the price of your coffee, Catholic Online School could keep thriving. Thank you. Help Now >
Alphege began his religious life in the English monastery of Deerhurst, but subsequently withdrew to live as a hermit near Bath. Thereafter he resumed community life, entering the Bath monastery and becoming its abbot. At the early age of thirty, he was consecrated bishop of Winchester. So great was his generosity to the poor that beggars were nowhere to be found in his diocese. Subsequently he was elevated to England's primatial see of Canterbury. When in 1011 Canterbury was overrun by Danish invaders, who began to slaughter the townspeople, the archbishop presented himself to the Danes, declaring, "Spare those poor innocent victims. Turn your fury rather against me." Alphege was thereupon consigned to a dungeon. Afterward, an epidemic among the Danes frightened them into releasing him. Newly freed, Alphege obtained the healing of many victims of the epidemic by his prayers and by distributing to them blessed bread. Despite this, the Danes later stoned and axed him to death in Greenwich. But eleven years later, it was to be a Danish king, Canute, who would honorably transfer Alphege's body to Canterbury.
Continue reading about St. Alphege of Canterbury