On Publication of the Minutes of 1998 Conference

VATICAN CITY, JUNE 16, 2004 - Here is the letter John Paul II addressed to Cardinal Roger Etchegaray on the occasion of the publication of the "Minutes of the International Symposium 'The Inquisition.'"

1. I have received with profound appreciation the volume that gathers the "Minutes" of the International Symposium on the Inquisition, organized in the Vatican from Oct. 29-31, 1998, by the Historical Theological Commission of the Committee for the Great Jubilee of the Year 2000.

The symposium was in response to the desire I expressed in the apostolic letter "Tertio Millennio Adveniente": "It is appropriate that ... the Church should become more fully conscious of the sinfulness of her children, recalling all those times in history when they departed from the spirit of Christ and his Gospel and, instead of offering to the world the witness of a life inspired by the values of faith, indulged in ways of thinking and acting which were truly forms of counter-witness and scandal" (No. 33).

Before public opinion the image of the Inquisition represents in some form the symbol of this counter-witness and scandal. In what measure is this image faithful to the reality? Before asking for forgiveness it is necessary to know the facts exactly and to acknowledge the deficiencies in regard to evangelical exigencies in cases in which it is so. This is the reason why the Committee asked for the consultation of historians, whose scientific competence is universally recognized.

2. The historians' irreplaceable contribution constitutes for theologians an invitation to reflect on the conditions of life of the People of God in their historical journey.

A distinction should guide the theologians' critical reflection: the distinction between the authentic "sensus fidei" and the prevailing mentality in a determined period, which might have influenced their opinion.

One must appeal to the "sensus fidei" to find the criteria for a just judgment on the past of the life of the Church.

3. This discernment is possible precisely because with the passage of time the Church, guided by the Holy Spirit, perceives with ever more profound awareness the exigencies of her conformation with the Spouse. In this way, the Second Vatican Council wished to express the "Golden Rule" that orients the defense of truth, a task that corresponds to the mission of the magisterium: "The truth cannot impose itself except by virtue of its own truth, as it wins over the mind with both gentleness and power" ("Dignitatis Humanae," 1; the statement is quoted in "Tertio Millennio Adveniente," No. 35).

The institution of the Inquisition has been abolished. As I said to the participants in the symposium, the children of the Church must revise with a spirit of repentance "the acquiescence manifested, especially in some centuries, with methods of intolerance and even violence in the service of truth" ("Insegnamenti," XXI/2 [1998/2], p. 899; see "Tertio Millennio Adveniente," No. 35).

This spirit of repentance clearly implies the firm determination to seek in the future paths of evangelical testimony of the truth.

4. On March 12, 2000, on the occasion of the liturgical celebration that characterized the Day of Forgiveness, forgiveness was asked for the errors committed in the service of truth, taking recourse to non-evangelical methods. The Church must carry out this service imitating her Lord, meek and humble of heart.

The prayer I then addressed to God contains the reasons for the petition for forgiveness, which is valid both for the dramas linked to the Inquisition as well as for the wounds they have caused in the memory: "Lord, God of all men, in some periods of history Christians have yielded to methods of intolerance and have not followed the great commandment of love, thus disfiguring the countenance of the Church, your Bride. Have mercy on your sinful children and accept our determination to seek and promote truth in the gentleness of charity, conscious that the truth only imposes itself with the force of truth itself. Through Christ our Lord."

The beautiful volume of the symposium's "Minutes" is in keeping with the spirit of this petition for forgiveness. In thanking all the participants, I invoke upon them the divine blessing.

The Why of Jesus' Death: A Pauline Perspective
Jerom Paul

Wisdom lies beyond the surface of life
Mary Regina Morrell

Glimpse of Me
Sarah Reinhard

The 3 stages of life
Michele Szekely

A Catholic Woman Returns to the Church
Cheryl Dickow

Proclaim the mysteries of the Resurrection!
Hugh McNichol 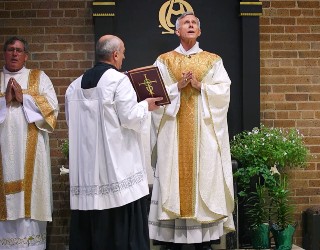