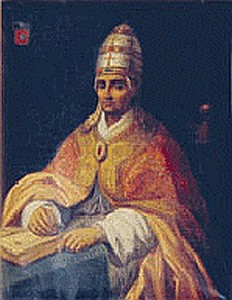 Benedict XII Born near Toulouse c. 1280/85, Jacques Fournier was a Cistercian who had studied in Paris before becoming Pope Benedict XII in 1334. The third pope to reign from Avignon, Benedict was a vigorous opponent of heresy and condemned groups like the Waldenses and the Cathars. To emphasize his point, he issued a bull affirming the beatific vision. He did not believe that clergy should hold more than one benefice (or office), and he opposed the idea of expectancy, that a man expecting to receive a benefice should receive money from the office before he was formally appointed. Benedict also insisted that bishops live in their dioceses. His rigorous monastic reforms were undone by his successors. Benedict sent money from Avignon to Rome to repair churches and to relieve the poor. Although he planned to return the papacy to Rome before his death in 1342, Benedict moved the papal archives to Avignon and built a fortified palace there.