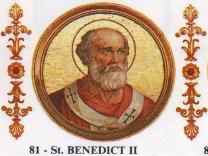 Benedict II Born and educated in Rome, St. Benedict served the church in every order of the clergy before his election to the papacy in 684. He persuaded Emperor Constantine IV Pogonatus that papal elections do not require imperial confirmation. The practice, however, continued. Benedict opposed monothelitism and restored churches during the course of his two-year papacy.