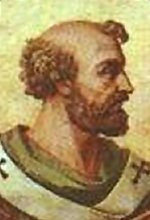 The life and sanctity of Pope St. Adrian III remains obscure. He was born in Rome and was elected to the papacy in 884. During his brief reign of sixteen months, violent vendettas that arose from the assassination of John VIII continued. George of the Avertine, a priest whom John had exiled and whom Marinus I had allowed to return to Rome, was blinded, possibly by order of Adrian III. In the summer of 885, Charles the Fat of the Holy Roman Empire convoked the Diet of Worms to insure the succession of his illegitimate son, Bernard. Adrian III died, en route to Worms, at the Abbey of Nonantola, where he was buried. He was canonized in 1891.