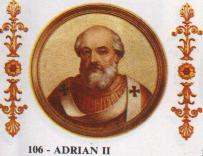 A member of the same family as Popes Stephen IV and Sergius III, Adrian II had twice refused the papacy before his election in 867. Born in 792, he was married before his election, and some scholars say that he refused celibacy. His papacy was troubled: the Duke of Spoleto inexplicably pillaged Rome after Adrian's election. Adrian's family was murdered in 868 by a relative of Anastasius the Librarian, possibly with his assistance. The pope had difficulties with Lothair II that ended with the emperor's death in 869; the pope anathametized Patriarch Photios of Constantinople, an act upheld by the fourth council of Constantinople. Adrian supported the missionary work of Sts. Cyril and Methodius among the Slavs. His last public act as pope was to crown Louis II Holy Roman Emperor at Pentecost, 872. Adrian died that fall.