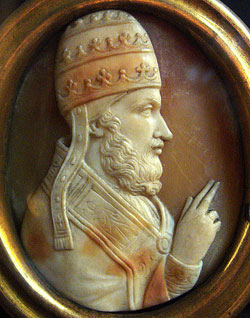 Adrian IV, Nicholas Breakspear was the only Englishman elected to the bishopric of Rome. Born c. 1100, he became a monk at the monastery of St. Rufus near Avignon and became the abbot in 1137. More than ten years later, the monks complained to Eugene III about the severity of their abbot. Eugene removed him from his post but made him a cardinal. In 1152, Breakspear became papal legate to Scandinavia and restructured the church there. He was elected pope two years later. He was the only pope to place Rome under interdict. He withdrew the interdict and crowned Frederick Barbarossa Holy Roman Emperor when Frederick captured the communard, Arnold of Brescia. Adrian did not remain on good terms with the new emperor, and the two were close to war when Adrian died in 1159. Adrian is said to have given Henry II of England dominion over Ireland in the bull Laudabiliter. Many doubt the authenticity of the bull, and those who do not doubt it say that it was later repudiated.