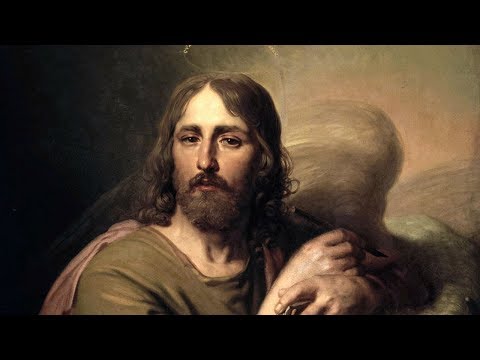 Luke, the writer of the Gospel and the Acts of the Apostles, has been identified with St. Paul's "Luke, the beloved physician" (Colossians 4:14). We know few other facts about Luke's life from Scripture and from early Church historians.

It is believed that Luke was born a Greek and a Gentile. In Colossians 10-14 speaks of those friends who are with him. He first mentions all those "of the circumcision" -- in other words, Jews -- and he does not include Luke in this group. Luke's gospel shows special sensitivity to evangelizing Gentiles. It is only in his gospel that we hear the parable of the Good Samaritan, that we hear Jesus praising the faith of Gentiles such as the widow of Zarephath and Naaman the Syrian (Lk.4:25-27), and that we hear the story of the one grateful leper who is a Samaritan (Lk.17:11-19). According to the early Church historian Eusebius Luke was born at Antioch in Syria.

In our day, it would be easy to assume that someone who was a doctor was rich, but scholars have argued that Luke might have been born a slave. It was not uncommon for families to educate slaves in medicine so that they would have a resident family physician. Not only do we have Paul's word, but Eusebius, Saint Jerome, Saint Irenaeus and Caius, a second-century writer, all refer to Luke as a physician.

We have to go to Acts to follow the trail of Luke's Christian ministry. We know nothing about his conversion but looking at the language of Acts we can see where he joined Saint Paul. The story of the Acts is written in the third person, as an historian recording facts, up until the sixteenth chapter. In Acts 16:8-9 we hear of Paul's company "So, passing by Mysia, they went down to Troas. During the night Paul had a vision: there stood a man of Macedonia pleading with him and saying, 'Come over to Macedonia and help us.' " Then suddenly in 16:10 "they" becomes "we": "When he had seen the vision, we immediately tried to cross over to Macedonia, being convinced that God had called us to proclaim the good news to them."

So Luke first joined Paul's company at Troas at about the year 51 and accompanied him into Macedonia where they traveled first to Samothrace, Neapolis, and finally Philippi. Luke then switches back to the third person which seems to indicate he was not thrown into prison with Paul and that when Paul left Philippi Luke stayed behind to encourage the Church there. Seven years passed before Paul returned to the area on his third missionary journey. In Acts 20:5, the switch to "we" tells us that Luke has left Philippi to rejoin Paul in Troas in 58 where they first met up. They traveled together through Miletus, Tyre, Caesarea, to Jerusalem.

Luke is the loyal comrade who stays with Paul when he is imprisoned in Rome about the year 61: "Epaphras, my fellow prisoner in Christ Jesus, sends greetings to you, and so do Mark, Aristarchus, Demas, and Luke, my fellow workers" (Philemon 24). And after everyone else deserts Paul in his final imprisonment and sufferings, it is Luke who remains with Paul to the end: "Only Luke is with me" (2 Timothy 4:11).

Luke's inspiration and information for his Gospel and Acts came from his close association with Paul and his companions as he explains in his introduction to the Gospel: "Since many have undertaken to set down an orderly account of the events that have been fulfilled among us, just as they were handed on to us by those who from the beginning were eyewitnesses and servants of the word, I too decided, after investigating everything carefully from the very first, to write an orderly account for you, most excellent Theophilus" (Luke 1:1-3).

Luke's unique perspective on Jesus can be seen in the six miracles and eighteen parables not found in the other gospels. Luke's is the gospel of the poor and of social justice. He is the one who tells the story of Lazarus and the Rich Man who ignored him. Luke is the one who uses "Blessed are the poor" instead of "Blessed are the poor in spirit" in the beatitudes. Only in Luke's gospel do we hear Mary 's Magnificat where she proclaims that God "has brought down the powerful from their thrones, and lifted up the lowly; he has filled the hungry with good things, and sent the rich away empty" (Luke 1:52-53).

Luke also has a special connection with the women in Jesus' life, especially Mary. It is only in Luke's gospel that we hear the story of the Annunciation, Mary's visit to Elizabeth including the Magnificat, the Presentation, and the story of Jesus' disappearance in Jerusalem. It is Luke that we have to thank for the Scriptural parts of the Hail Mary: "Hail Mary full of grace" spoken at the Annunciation and "Blessed are you and blessed is the fruit of your womb Jesus" spoken by her cousin Elizabeth.

Reading Luke's gospel gives a good idea of his character as one who loved the poor, who wanted the door to God's kingdom opened to all, who respected women, and who saw hope in God's mercy for everyone.

The reports of Luke's life after Paul's death are conflicting. Some early writers claim he was martyred, others say he lived a long life. Some say he preached in Greece, others in Gaul. The earliest tradition we have says that he died at 84 Boeotia after settling in Greece to write his Gospel.

A tradition that Luke was a painter seems to have no basis in fact. Several images of Mary appeared in later centuries claiming him as a painter but these claims were proved false. Because of this tradition, however, he is considered a patron of painters of pictures and is often portrayed as painting pictures of Mary.

He is often shown with an ox or a calf because these are the symbols of sacrifice -- the sacrifice Jesus made for all the world.

Luke is the patron of physicians and surgeons. 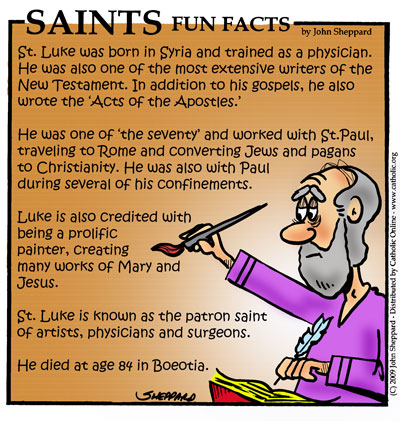