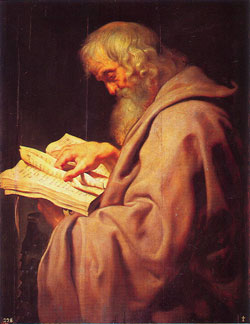 In St. Matthew's Gospel, we read of St. Simon or Simeon who is described as one of our Lord's brethren or kinsmen. His father was Cleophas, St. Joseph's brother, and his mother, according to some writers, was our Lady's sister. He would therefore be our Lord's first cousin and is supposed to have been about eight years older than He. No doubt he is one of those brethren of Christ who are  mentioned in the Acts of the Apostles as having received the Holy Spirit on Pentecost. St. Epiphanius says that when the Jews massacred St. James the Lesser, his brother Simeon upbraided them for their cruelty. The apostles and disciples afterwards met together to appoint a successor to James as bishop of Jerusalem, and they unanimously chose Simeon, who had probably assisted his brother in the government of that church. In the year 66 civil war broke out in Palestine, as a consequence of Jewish opposition to the Romans. The Christians in Jerusalem were warned of the impending destruction of the city and appear to have been divinely ordered to leave it. Accordingly that same year, before Vespasian entered Judaea, they retired with St. Simeon at their head to the other side of the Jordan, occupying a small city called Pella. After the capture and burning of Jerusalem, the Christians returned and settled among the ruins until the Emperor Hadrian afterwards entirely razed it. We are told by St. Epiphanius and by Eusebius that the church here flourished greatly, and that many Jews were converted by the miracles wrought by the saints. When Vespasian and Domitian had ordered the destruction of all who were of the race of David, St. Simeon had escaped their search; but when Trajan gave a similar injunction, he was denounced as being not only one of David's descendants, but also a Christian, and he was brought before Atticus, the Roman governor. He was condemned to death and, after being tortured, was crucified. Although he was extremely old - tradition reports him to have attained the age of 120 - Simeon endured his sufferings with a degree of fortitude which roused the admiration of Atticus himself. His feast day is February 18