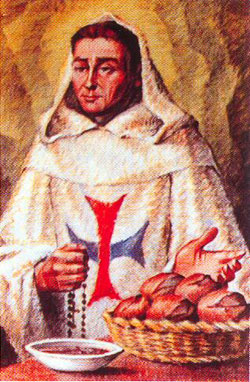 The very first words that Simon de Rojas uttered as a child were "Ave Maria." Years later, as a priest of the Trinitarian Order, Simon, a native of Valladolid, Spain, would come to be known as "Father Ave Maria" for his extraordinary devotion to the Blessed Mother. He was an early advocate of total consecration to the Blessed Virgin Mary and of the feast of the Holy Name of Mary. Zealous in fulfilling his duties of preaching and hearing confessions, he sustained himself by spending much time in prayer during the day and late at night. He also served as confessor to the Spanish queen, Margaret of Austria. When in 1611 she fell gravely ill following childbirth, becoming comatose, her husband King Philip III feared that she would be unable to receive the sacraments before dying. Father Rojas then came to her bedside. After he had greeted her with the words, "Ave Maria, Senora" ("Hail Mary, my lady"), she instantly became conscious and answered him, "Gratia plena, Padre Rojas" ("Full of grace, Father Rojas"). Father Rojas was thereupon able to administer to her the anointing of the sick and Viaticum before she died.
Continue reading about St. Simon de Rojas