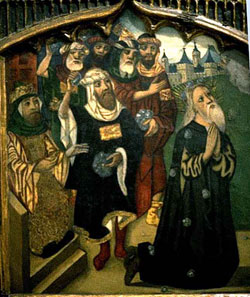 Raymond was the son of one of the military leaders who reconquered Majorca from the Moslems. He was born at Palma, Majorca. He entered the service of King James I of Aragon, was appointed grand senechal by James and in 1257 married Blanca Picany. Despite his marriage and two children, he led a dissolute life, but changed his lifestyle in 1263 when he had a vision of Christ while writing to a woman with whom he was having an affair, followed by five more visions. After pilgrimages to Compostela and Rocamadour, he became a Franciscan tertiary, provided for his family, gave the rest of his wealth to the poor, and determined to devote the rest of his life to converting the Mohammedans. He spent the next nine years learning all he could of Moslem philosophy, religion, and culture, and learning Arabic. He founded the short-lived Trinity College on Majorca in 1276 to put into effect his idea of a missionary college, visited Rome in 1277 to enlist the Pope's support, went to Paris in 1286, and in 1290 joined the Friars Minor at Genoa. After a serious illness, he went to Tunis in 1292, began preaching, but was almost immediately forcibly deported by the Moors. Further appeals to Popes Boniface VIII and Clement V for aid in his mission to the Mohammedans were fruitless, as was a visit to Cypress. After lecturing at Paris on Arabic metaphysics for a time, he was successful in getting to Bougie in Barbary in 1306 but was again imprisoned and deported. He continued his appeals for aid to the Pope and to the Council Vienne in 1311 but with no success, resumed lecturing at Paris, and again return to Bougie in 1315. This time he was stoned and left for dead but was rescued by the Genoese sailors and died on board ship near Majorca on September 29th. He wrote voluminously - more than 300 treatises (many in Arabic) on philosophy, music, navigation, law, astronomy, mathematics, and theology, chief among his writings being Arbre de philosophia de armor. He also wrote mystical poetry of the highest order and is considered the forerunner of Teresa of Avila and John of the Cross; his Blanquera is the first novel written in Catalan. His cult was confirmed in 1858 by Pope Pius IX. His feast day is June 30th.