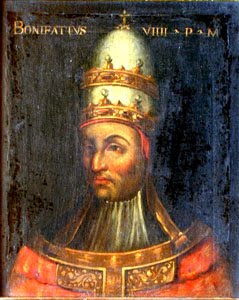 Boniface VIII The wishes of Pope Boniface VIII were to maintain peace in Europe and to free the Holy Land from the Turks. His was not a successful papacy. Born Benedetto Gaetani c. 1235, he was a lawyer, a papal notary, and a cardinal before he advised Celestine V to resign in 1294. Boniface was then elected to the see of Rome and his reign was characterized by conflict with Philip IV of France. Boniface believed strongly in the supreme power of the papacy, a principle expounded in his bull, Unam Sanctam, a popular Medićval document. Philip believed that he held sovereignty over all in his kingdom, including the clery. In 1297, the pope and the king reached an understanding: Boniface canonized Louis IX of France and Philip could tax the clergy in an emergency without consulting the pope. In 1302, Philip demanded that Boniface resign because his birth was illegitimate; because he was a heretic; and because he had engaged in sexual misconduct. Boniface was about to excommunicate Philip when the king's troops captured the pope at Agnani. Freed by the citizens, Boniface returned to Rome in September, 1303, and died there a month later.