Feastday: November 3
Patron: of Archdiocese of Armagh, Diocese of Down and Connor
Birth: 1095
Death: 1148 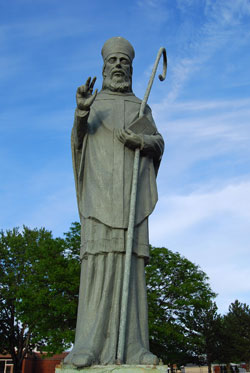 Bishop famous for writing prophecies of the popes. Also listed as Mael Maedoc ua Morgair or Maolrnhaodhog ua Morgair, Malachy was born in Armagh, Ireland, in 1095. He was ordained by St. Cellach or Celsus of Armagh in 1132 and studied under Bishop St. Maichius of Lismore. Malachy reformed ecclesiastical discipline and replaced the Celtic liturgy with the Roman when he served as abbot of Bangor. In 1125 he was made bishop of Connor, using Bangor as his seat. He also established a monastery at Iveragh, Kerry. He was named archbishop of Armagh in 1129. In 1138, he resigned and made a pilgrimage to Rome. He visited St. Bernard at Clairvaux, France, wanting to be a monk there, but returned to Ireland to found Mellifont Abbey, also serving as papal legate to Ireland. He returned to Clairvaux and died on November 2 in St. Bernard's arms. St. Bernard declared him a saint, an action confirmed in 1190 by Pope Clement III. Malachy is known for many miracles, including healing the son of King David I of Scotland. Malachy's prophecies did not appear until 1597. Tradition states that Malachy wrote them while in Rome and that they were buried in papal archives until 1597, when Dom Arnold de Wyon discovered them. Serious doubts remain as to the true authorship of the prophecies.