St. Matthias Abbey Church or Abtei St. Matthias in Trier, Germany, is a beautiful 12th-century church, part of an active Benedictine abbey and is still visited by many Catholic pilgrims. The abbey houses the relics of St. Matthias, the apostle who was chosen to replace Judas Iscariot as he was a witness to the Resurrection. 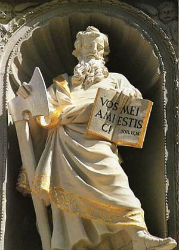 A Baroque facade was added to the lower west front, which centers on a sculpture of St. Matthias holding an axe. The figure holds an open book with a reference to John 15:14: "You are my friends if you do what I command."

LOS ANGELES, CA (Catholic Online) - As it reads in the New Testament, Acts 1:26 reports that Matthias was chosen to replace Judas. Matthias was one of the 72 disciples Jesus sent out during his ministry, according to early Bible writers. Matthias is reported to have lived an ascetic life in order to make his spirit subject to the Crucified One.

Matthias preached in Cappadocia, Turkey, and was martyred at Colchis, on the eastern coast of the Black Sea. He was sentenced to be stoned to death but miraculously survived the ordeal. He was later beheaded.

Constantine's mother, St. Helena is reputed to have brought St. Matthias' relics from Jerusalem and evenly divided them between the Basilica of St. Mary Major in Rome and this abbey church at Trier.

The monks enshrined these relics in Trier in a beautifully carved tomb before the altar. Records dating back to the 5th century indicate the existence of a monastery here, on the graves of the first Christian evangelists.

Both monastery and church were rebuilt after the disaster of Maundy Thursday of 882 when the Normans conquered and destroyed Trier. Most of the church that remains today dates from the Romanesque period, or 1127-1160. The church was consecrated in 1148 by Pope Eugene III.

A Baroque facade was added to the lower west front, which centers on a sculpture of St. Matthias holding an axe. The figure holds an open book with a reference to John 15:14: "You are my friends if you do what I command."

A "westwork" at the west end of the church features a tower of blind arcades and a gallery inside. There are two Romanesque towers at the east end, with square piers and simple round arches with no decoration, illuminated by small windows in the clerestory.

There is also the impressive ribbed vaulting, which continues into the westwork and the transepts. Painted roof bosses of bishops, angels and saints adorn each vault intersection. It's suggested that visitors bring binoculars or a zoom lens for a good look. The side aisles have a simple Romanesque groin vault.

The Tomb of the Apostle, with a barefooted marble effigy of Matthias, lies at the front of the nave surrounded by tall candles. The crypt also contains two large sarcophagi labeled with Latin names.

South of the church is the Benedictine Abbey of St. Matthias, with a 13th-century refectory and dormitory and 18th-century main building. Early Romanesque cloisters have been partly restored.