The Many Reasons Why We Call it Good Friday

Free World Class Education
FREE Catholic Classes
He and I both knew we had participated in the mystery we were remembering on this Good Friday. His face - and the face of his beloved - revealed the face of Jesus Christ, Love Incarnate.

On Good Friday we are reminded that death is no longer the final word. For those filled with hope of the Resurrection, it is no longer an enemy but a friend, the passageway to life eternal. We are also promised that the suffering we are invited to bear, when joined to Jesus Christ, can become a vehicle for love and mercy. It can also become material out of which we are changed, by grace, into a reflection of Mercy Incarnate, the Lord Jesus Christ, for others. 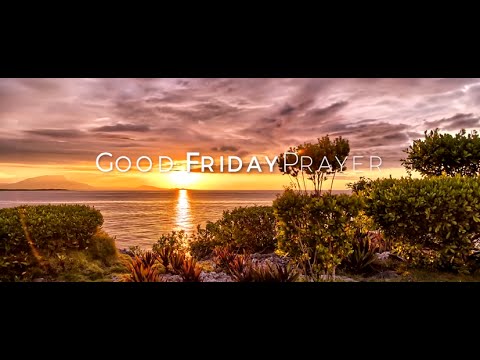 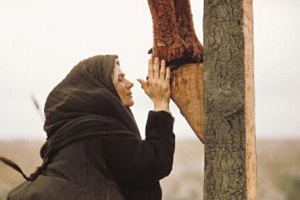 CHESAPEAKE, VA (Catholic Online) - On Good Friday, I accompany the priest into an empty Church sanctuary which has been stripped in honor of Jesus Christ who emptied Himself for us. With him, I lay prostrate in silence on the floor.

It is a powerful , life changing experience for me. After all these years, I am always drawn back to a particularly memorable Good Friday experience. While serving at Christ the King Parish in Norfolk, Virginia; I saw the face of love reflected in an elderly married couple.

I served as Deacon at the solemn Celebration of the Lords Passion, the Good Friday Service. I had just carried the Cross into the waiting assembly chanting three times: "This is the wood of the Cross, on which hung the Savior of the world," at which the assembly responded, "Come Let us worship." Now that cross, lodged in the arms of the priest, was presented for all who had gathered to come forward and venerate with a kiss or a profound bow, as is the ancient custom.

This frail couple approached. The wife could barely walk without her husband´s loving firm support. As they drew closer, I could see that the husband´s face was filled with deep wrinkles, the kind of love lines etched in the face from suffering borne with grace. His head was covered with unkempt white hair and framed with a coarse white beard. His eyes were filled with pure love for his beloved wife whom he assisted so tenderly as she came forward to venerate the Holy Cross.

Her eyes were distant and her face was beautiful, wrinkled but profoundly feminine, revealing a landscape of embedded sorrows and joys, a full life now coming to its winter. As she drew closer, I could tell that the lines in her face had been accentuated by the progressive ravages of Alzheimer´s disease.

He stooped to kiss the cross and in so doing moved his steady hands and his face momentarily away from her gaze. She looked at first afraid, because his face had left her view for a brief moment. I noticed as he came back into her view that a serene look filled her eyes. She seemed to be asking her beloved a simple question with her expression "What now?"

He directed her head toward the base of the Cross and in so doing he caught my eyes with his own. Instantly, I raised the Cross so that she could touch it with her lips as a sign of her surrendered love. He smiled at me and directed his beloved wife back to the pew. Words were useless. I knew, he knew, and the Lord knew.

A little later, during the third part of the solemn Good Friday service, when Holy Communion is given to the faithful for the last time before the Easter Vigil, I saw them again. I had the privilege of carrying the Body of Christ to this same couple. She was unable to come forward again because her body just wouldn´t respond to her mind. As I approached them with the consecrated hosts, he insisted that she receive the Lord first and directed my hand toward her mouth - with great affection and love-- for his wife, but even more for the Eucharistic Lord whom he so obviously loved.

Then he received the Lord, present fully, Body, Blood, Soul and Divinity, in the Most Holy Eucharist. And, with a profound smile, responded to my affirmation, "the Body of Christ" with a deep, heartfelt, "Amen." Other words were not needed. He and I both knew we had participated in the mystery we were remembering on this Good Friday. His face - and the face of his beloved - revealed the face of Jesus Christ, Love Incarnate.

He and I both knew the beauty of the moment - and we exchanged that knowledge - without words - in the meeting of our eyes. We both knew that this beautiful woman, whom he cherished, was already in the hands of a loving God. It would all be alright. She would one day be made entirely new. The love that he bore for her was a participation in a deeper Love -- the kind revealed on the Cross that they had both just kissed; the kind communicated to them, given to them freely in the Body of Christ they had just consumed. He and I both knew at that moment why we call it "Good" Friday.

As I walked back toward the altar, I recalled another Good Friday from my past. On that Good Friday, I had served as a Deacon at a committal and funeral service for my dear wife´s father, Malcolm. He had died from the ravages of Alzheimer's disease. For years, in the progression of that disease, I watched Malcolm reveal the Face of the suffering Christ.

It culminated in his passage through the final portal of the great mystery of life and the invitation to faith that we call death.

During those years, I also watched my beloved wife, his loving daughter, reveal the Face of Christ. Through her relationship with her Dad (whom she had the privilege of caring for through the progressive stages of Alzheimer´s disease), she became an "icon", a mirror, a living word of love to me and others whose lives she touched through her faithful witness of love.

As her father became a child and his daughter became a second mother to him, I beheld what I now call a "Mary Moment" because it captures the heart of Mary's surrender to the Lord's invitation. I watched my beloved bride truly become, in a new and profound way, a daughter of a merciful Heavenly Father and in that participation in divine Love, embrace her own earthly father with the love that is greater than any that is purely human.

In that chorus of lived out sacrificial love, she resembled Mary, the Virgin of Nazareth, whose humble "Fiat" of surrendered love opened the floodgates of heaven and changed all of human history.

This graveside committal service took place, at his request, in Malcolm's childhood home of Andover, Massachusetts. At the traditional time, when Catholics remember Our Lord, Love in the flesh, hanging on Golgotha´s hill, I commended Malcolm to the Mercy revealed on the altar of the Cross. As we placed his remains in the womb of the earth until his resurrection at the last glorious day, I also experienced why it is called Good Friday.

That too was a moment when words were useless.

As I led the ritual of prayers, I blessed the ground with holy water and spoke these words in a graveside reflection, "I now know a little more deeply why we call it 'Good' Friday - it is good because it reveals the heart of a Good God of boundless merciful love who Himself knows our pain and who, in His Son, transforms it all by redemptive love.

"This is not the end for our brother, father and friend Malcolm, but it is a new beginning. Life triumphs over death and love transforms pain and suffering because Jesus hung on that Cross on that Friday we call 'Good'. That tomb in Jerusalem is empty now, and one day, so too will this ground give back Malcolm, made entirely new by the power of transforming love!"

Through the encounter with the elderly couple, as well as at the graveside of my father-in-law, I experienced the beauty of truly surrendered love. Every Good Friday is an invitation to each of us to be reminded of that same love through our encounter with Love Incarnate, Jesus Christ, who stretched out his arms to embrace each one of us.

On Good Friday we are reminded that death is no longer the final word. For those filled with hope of the Resurrection, it is no longer an enemy but a friend, the passageway to life eternal. We are also promised that the suffering we are invited to bear, when joined to Jesus Christ, can become a vehicle for love and mercy. It can also become material out of which we are changed, by grace, into a reflection of Mercy Incarnate, the Lord Jesus Christ, for others.

At the end of the Good Friday service at Christ the King, when I turned with the priest to face the gathered assembly, my eyes were drawn again to this beautiful couple. I will never forget their faces. I saw the face of Christ revealed. What a privilege it was for me to have experienced each of those two Good Fridays. What a privilege it will be to experience another one this year. Love is stronger than death. That is one of many reasons why we call it Good Friday.
----

Deacon Keith A. Fournier is Founder and Chairman of Common Good Foundation and Common Good Alliance. A married Roman Catholic Deacon of the Diocese of Richmond, Virginia, he and his wife Laurine have five grown children and seven grandchildren. He is a human rights lawyer and public policy advocate who served as the first and founding Executive Director of the American Center for Law and Justice in the nineteen nineties and has long been active at the intersection of faith and culture. He serves as Special Counsel to Liberty Counsel. He is a senior contributing writer to The Stream.