To honor the lost: A brief history of Memorial Day 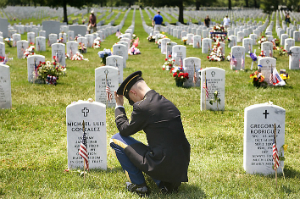 Memorial Day is a day to honor our lost heroes, those who gave all that we may live free.

LOS ANGELES, CA (Catholic Online) -  Throughout the world, various traditions, possibly dating to prehistoric times, have celebrated those who fell during conflict. Graves have long been adorned with flowers, however the observances were always ad-hoc. In the United States, the first organized commemoration of the holiday took place during the American Civil War.

The roots of the holiday are subject to historical debate but there were several instances of memorial observances staged in the South, then shortly thereafter in the North, during the war. As soon as the war concluded, a public observance took place in Charleston, South Carolina, on May 1, 1865 dedicated to Union soldiers who died in an area prisoner of war camp.

Pray for our veterans who died for us.

In 1866, the idea of a special holiday to commemorate the war dead was proposed to former Union General John Murray, who shared the idea with fellow soldiers in New York. In addition to General Murray, the idea was also promoted by General John Logan of the Grand Army of the Republic, a Union veterans organization. The notion quickly gathered support and national services were organized, patterned after observances in the former Confederacy. The day was referred to as "Decoration Day."

Decorate the veteran in your family with a Catholic medal.

The occasion was soon replicated across several states in the following years. With 600,000 killed during the war, many Americans had reason to mourn.

In 1882, the name of the holiday began to change to Memorial Day, although its observances remained the same. The holiday was frequently observed and in 1971, the federal government officially proclaimed the day "Memorial Day" set for the last Monday in May.

Initially, the holiday which arguably began in the South, became a subject of division. Southerners objected to the northern promotion of the holiday and felt disenfranchised. Many Southern states refraind from official celebration for years, preferring instead to memorialize their war losses in other ways. Some places observed General Robert E. Lee's birthday instead and memorilized their dead on that day (Jan 19, also Dr. Martin Luther King Jr.'s birthday).

However, the bitterness of the Civil War eventually faded and the holiday took on new significance as the U.S. found itself engaged in new wars around the globe.

Although the purpose of the holiday is to remember those who died in war, many Americans have forgotten its sting. It's an ironic twist, considering the United States remains in the midst of its longest running war in history, engaged against Al Qaeda and terrorists since 2001.

For most Americans, the holiday has become an extended weekend with festivals and other leisure activities scheduled for the time previously set aside for memorial observances. For the United States, the holiday marks the beginning of the summer season when children break from school and vacations start.

Despite the happy correlation between vacations and the holiday, many Americans still observe the original holiday and all its solemn decorum. Veterans groups stage memorial services to honor the dead as well as various churches and organizations. The President is expected to visit the tomb of the Unknown Soldier to lay a wreath, symbolizing the nation's reverence for those who sacrificed everything for the rest of us.

That the United States remains a free country, whose freedom is only jeopardized from within, is a testament to the courageous sacrifice of our veterans. Throughout American history over 1.32 million Americans have died in war. Another 1.5 million have been wounded. Countless others have lived with the psychological scars of war without the loss of limbs. And most Americans have seen or heard of war's devastating effect on their families and friends. Even today, private homes are torn apart by the collateral effects of war.

This is an epic price, but one that we still deem worth the sacrifice, all things considered. We still enlist our youth, we dedicate billions of dollars to defense, and we continue to improve the quality of life for our veterans, even if only in small increments.

The least that is asked of the rest of us is to pause and remember those who sacrificed for us. Although Memorial Day is dedicated to the memory of the dead, it is also fitting to remember our veterans who live with the scars of service.

Remember your hero this Memorial Day with a virtual prayer candle.

May God bless our troops and may God bless America.https://catholiconline.shopping/search?type=product&q=military*