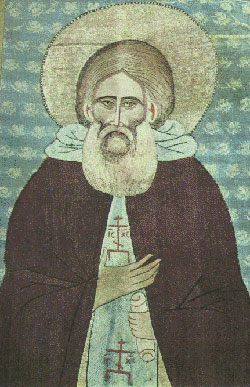 St. Sergius was born into a Syrian family who live in Palermo and was educated at the Roman choir school. Before being elected pope in 687, he was the titular priest of Sta. Susanna. At the same time, in other places in Rome, the archpriest Theodore and the archdeacon Paschal were elected pope. Theodore soon acknowledged Sergius' election, but Paschal, with the backing of the exarch, maintained that he was the pope. Sergius' supporters stormed the Lateran to consecrate him. Paschal called on the exarch, who came to Rome to settle the controversy. He eventually approved Sergius' election in return for the payment of a bribe that Paschal had promised. Sergius refused to endorse the Quintisext Council, which he saw as inimicable to Roman practices. He saved a representative of Justinian II from a Roman mob. He introduced the use of solemn processions in the feasts associated with the Theotokos, and he began the practice of singing Agnus Dei during the mass. He also inaugurated the feast of the exaltation of the cross. Sergius died in 701.

Continue reading about St. Sergius I