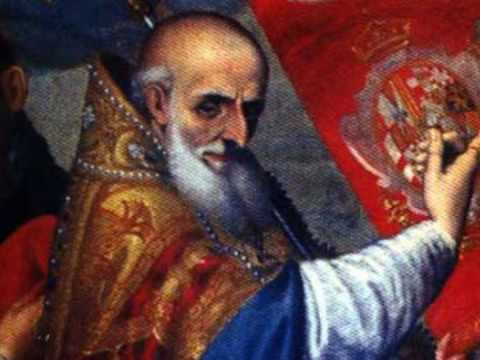 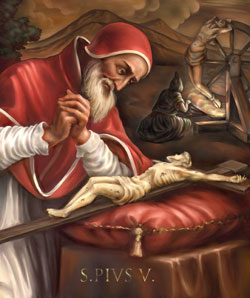 Pope from 1566-1572 and one of the foremost leaders of the Catholic Reformation. Born Antonio Ghislieri in Bosco, Italy, to a poor family, he labored as a shepherd until the age of fourteen and then joined the Dominicans, being ordained in 1528. Called Brother Michele, he studied at Bologna and Genoa, and then taught theology and philosophy for sixteen years before holding the posts of master of novices and prior for several Dominican houses. Named inquisitor for Como and Bergamo, he was so capable in the fulfillment of his office that by 1551, and at the urging of the powerful Cardinal Carafa, he was named by Pope Julius III commissary general of the Inquisition. In 1555, Carafa was elected Pope Paul IV and was responsible for Ghislieri's swift rise as a bishop of Nepi and Sutri in 1556, cardinal in 1557, and grand inquisitor in 1558. While out of favor for a time under Pope Pius IV who disliked his reputation for excessive zeal, Ghislieri was unanimously elected a pope in succession to Pius on January 7, 1566. As pope, Pius saw his main objective as the continuation of the massive program of reform for the Church, in particular the full implementation of the decrees of the Council of Trent. He published the Roman Catechism, the revised Roman Breviary, and the Roman Missal; he also declared Thomas Aquinas a Doctor of the Church, commanded a new edition of the works of Thomas Aquinas, and created a commission to revise the Vulgate. The decrees of Trent were published throughout all Catholic lands, including Europe, Asia, Africa, and the New World, and the pontiff insisted on their strict adherence. In 1571, Pius created the Congregation of the Index to give strength to the Church's resistance to Protestant and heretical writings, and he used the Inquisition to prevent any Protestant ideas from gaining a foot hold in Italy. In dealing with the threat of the Ottoman Turks who were advancing steadily across the Mediterranean, Pius organized a formidable alliance between Venice and Spain, culminating in the Battle of Lepanto, which was a complete and shattering triumph over the Turks. The day of the victory was declared the Feast Day of Our Lady of Victory in recognition of Our Lady's intercession in answer to the saying of the Rosary all over Catholic Europe. Pius also spurred the reforms of the Church by example. He insisted upon wearing his coarse Dominican robes, even beneath the magnificent vestments worn by the popes, and was wholeheartedly devoted to the religious life. His reign was blemished only by the continuing oppression of the Inquisition; the often brutal treatment of the Jews of Rome; and the ill advised decision to excommunicate Queen Elizabeth I of England  in February 1570, an act which also declared her deposed and which only worsened the plight of English Catholics. These were overshadowed in the view of later generations by his contributions to the Catholic Reformation. Pope Clement beatified him on May 1, 1672, and Pope Clement XI canonized him on May 22, 1712.